Why Do Storms Have Names? 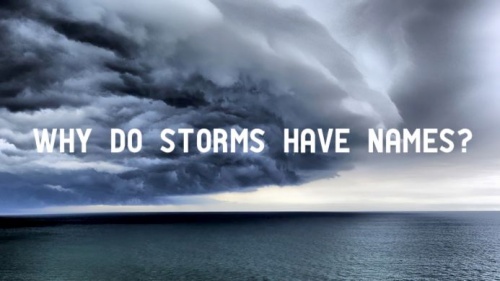 Storm Hannah is battering the UK today. But how do storms get their names and why do they have them in the first place?

The naming of storms goes back to the 16th century at least, where sailors in the Carribean would name tropical storms after saints. However, it took the Met Office until 2014 to follow the rest of the world and begin giving official titles to extreme weather.

Storms are named in order to aid communication. It allows media companies and government agencies to spread awareness more effectively. Giving something a name makes it more tangible and this helps the public understand the threat and stay safe.

Names are only given to storms when it has the potential to cause an Amber or Red Warning. That is unless it has come over from the US. In which case the storms will keep its American name to avoid confusion.

The names themselves are on an alphabetical list which alternates between male and female-coded names. The next storm after Hannah will be called Idris, then Jane, then Kevin and so on.

Strangely, there is evidence to suggest that storms with feminine names are more likely to hurt more people than storms with masculine ones. However, experts believe this is because people feel less threatened by female names and are therefore more likely to take risks which they shouldn’t.

The list of names is re-written every year, but with climate change causing more extreme weather, we may soon need a longer list.