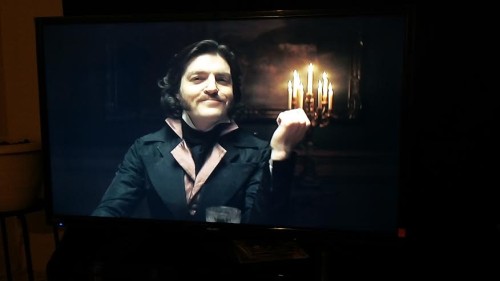 Leo Tolstoy’s epic novel about Napoleon’s invasion of Russia is certainly a book and a half. Renowned for being one of the longest ever written, my earliest memories are of buying a copy as a teenager and being determined to read it cover to cover. The ‘big read’ factor didn’t put me off, in fact it had the opposite effect. Like a wild horse rustler trying to conquer an untamed but beautiful mare. Well I read it. Didn’t understand it. Well to me it read like a historical chronicle so I didn’t get what made it such a classic of literature. That’s teenagers for you eh.

The BBC’s £10 million six part adaptation is less heavy fare. Seen through the eyes of five aristocratic families, the Kuragins, Drubetskoys, Bezukhovs, Bolkonskys and Rostovs, this second episode was pacier than the introductory first. Just as well. With so many new faces involved the quick-switching is effective and entertaining with little time to rest on your laurels. In this episode the boyish, spectacled nobleman Pierre Bezukhov becomes a little suspicious of his new bride Helene – and for good reason. His ‘little boy lost’ look reminds one of a bright eyed chemistry student stumbling through the uni halls during Freshers Week. This innocence exaggerated for effect as 19th Century femme fatale Helene cheats on him with Stacy Keach lookalike Fedya Dolokhov, played by Tom Burke. Dolokhov is a charismatic, playboy who looks like he can handle himself so you can understand the stunned silence at a nobleman’s banquet when Pierre challenges him to a duel.

Elsewhere, news reaches the Bolkonsky household that the dashing, conscience-driven Prince Andrei (the Russian Darcy) has died while fighting the Napoleonic forces at the front. Well not exactly fighting. He enlisted as an adjutant, which is second in command to the senior officer, so he must have been hit by a stray bullet or something! They decide not to tell his pregnant wife Natasha in case it causes her further distress at this delicate moment. Just at the point she is about to give birth Andrei returns home unharmed. This is no consolation to his wife who dies during childbirth but the child is unharmed. Her bloodstained bed in the closing scenes summing up the harsh cards dealt this aristocratic family and which neither poor nor rich can escape. War and Peace should have been called Life and Death.

The star studded cast includes X files’ Gillian Anderson as Anna Pavlovna Sherer, and the Young Ones’ Adrian Edmondson as Count Iilya Rostiv. If you can keep up with the constant demands of the new names and faces cropping up in these five families it should prove both enjoyable and educational. Not so much keeping up with the Jones as with the Kuragins, Drubetskoys, Bezukhovs, Bolkonskys and Rostovs (but certainly not the Kardashians).