Voices of Africa: A Selection of African Short Films 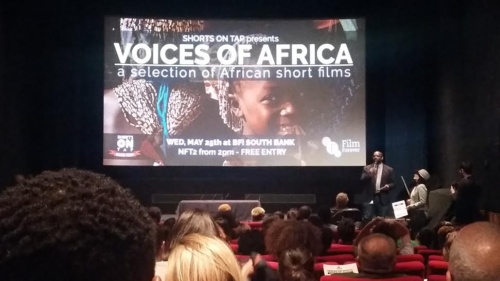 This series of Shorts On Tap’s programme of international short films screened at the BFI, Southbank on May 25th focused on the African continent. BFI Future Film and the inShort Film Festival were also involved in making the event happen and the audience were treated to a screening of five short films, also Q & As with the film-makers and industry professionals. Amongst them was Keith Shiri the founder of the London African Film Festival.

The afternoon opened with the documentary Kanraxel – The Confluence of Agnack about the village community of Agnack Grand in Senegal. The wetlands and marshlands there a natural environment for the fishing markets central to village life, although one fisherman complains that the habitat has been overworked by over-eager fishermen and consumption demands. Twenty languages are spoken in this tiny community, its multi-lingual essence so accentuated that conversation effortlessly slips in and out of these tongues from sentence to sentence – particularly when villagers are speaking in code. People from neighbouring villages are most likely to do this. However, this does not indicate any sense of hostility or distance between these neighbours – in fact quite the opposite. Notably, it is the women from neighbouring villages who club together to help pound the rice in Agnack Grand during a wake to honour the death of its chief Dominic Mane.

Land reclamation is the main concern in Katy Rustrick’s Two Leaves and a Bud. The Nandi Hills community of Kenya is a thriving tea producing region with workers sometimes toiling from 6am under back-breaking conditions. The majority of tea consumed in the UK is imported from Kenya so the importance of this livelihood is never understated, however, the ownership of the infrastructure is. There is some confusion about who has legal right to the land upon which the produce grows. It is currently lease-held but tea producers and crop pickers alike seek clarification amidst fears corrupt politicians may be complicit in thwarting their land reclamation aims.