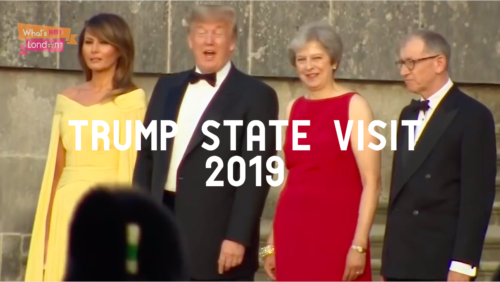 It’s confirmed. President Donald Trump will be coming to the UK for his first State Visit in June 2019. But hasnt he come alread? Why is he coming? And why are people so angry about it?

Firstly, yes, Trump has visited the UK before in July 2018. However, this was a four-day working visit which saw him spend most of his time at his golf course at Turnberry where he could escape protestors and play a little golf.

This year’s state visit, on the other hand, will be a much grander affair. For a start, State Visits are hosted by The Queen, with visitors receiving a ceremonial welcome, state banquet and the chance to stay at either Buckingham Palace or Windsor Castle.

That brings us nicely onto why he is coming. It is no secret that Trump loves some pomp, some regal sophistication and Theresa May is playing on that to make him feel special. Using the grandness of the occasion – which Trump will love – to get something she needs. A trade deal.

With the Brexit process stalling May needs a win and post-Brexit Britain needs trading partners. She hopes that this state visit will help butter up Trump and help her achive both her aims in one fell swoop.

However, not everyone is exciting about the visit. Within minutes of the annoucemnet activits began gearing up for protests which are bound to feature hundreds of thousands of people and of course the Trump Baby Blimp, which made it’s debut during his last visit. With most of the festivities taking place in London, Trump will be less able to escape the protests and will likely have to face them himself at some point.

Some will argue that protesting against a foreign head-of-state is a bad idea. Suggesting it could jeopardise the UK-US trade deal which Britain will so desperately need post-Brexit.

However, protestors want nothing to do with a president who continues to show that racism, sexism, transphobia and more run to the core of his being. Whatever side you’re on, make sure you get the 3rd – 5th of June in your diaries, its going to be a crazy couple of days.