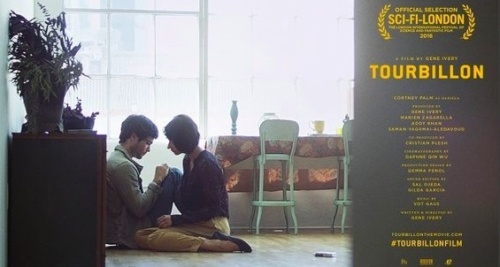 SCI-FI LONDON 2016 featured an entertaining and challenging selection of shorts and independent features at Stratford Picturehouse with Tourbillon receiving its world premiere. Directed by Gene Ivery, his debut movie explores the possibility of immortality through the life of Daniela who has been genetically modified by her scientist father so that she can live forever. Although in an age obsessed society such as ours this would be much coveted, the harsh realities hit home for this woman who will never age beyond her twenties. A shady organisation known as The Family are her main source of comfort but are only interested in conducting countless tests to extract this elixir of youth from her.

This patient, distant film dismantles the idea that lasers, aliens and intergalactic battles are par the course for sci-fi. Dialogue-driven and dreamlike it’s a brave take on the genre with female cinematographer Daphne Qin Wu instrumental in the way it leads through the female gaze. One would have thought that an essential requirement for such a movie but in a male-dominated industry it’s a rarity.

In this interview with What’s Hot London?’s Eddie Saint-Jean, the director Gene Ivery provides some insight into the production.

Q. What was the inspiration behind the film’s theme?

A. In Spain there’s a right of passage age when you turn 18. So it was around that age that it hit me that time is passing by and there’s all these milestones you have to fulfil before you die. When I turned 24 I thought I haven’t done anything and started to get very anxious about dying. I think this happens to everybody. So it came from trying to explore this problem and I think making the movie helped me. However, the movie doesn’t give you a clear answer about whether immortality is good or bad.

Q.Was it your decision to ensure the cinematographer was female?

A. I believe film sets tend to be very male dominated and it needs a female presence on set. I think they bring a certain sensibility to how you do things, particularly the most crucial decisions. Secondly, for a film like this that’s about a woman it’s important. I am not a woman so the more help I can get the better. But the number one reason is I think she’s an amazing cinematographer, she has great talent and not only is she good with the visuals but also at understanding characters.

Q. What are your future plans for the film?

A. We’re going to go back to LA and put it back on the festival circuit and hopefully find a sales agent.