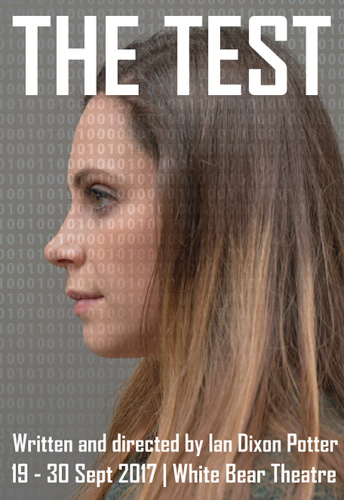 Review of: The Test (Theatre)

If HAL the conscious computer from Arthur C. Clarke’s 2001: A Space Odyssey incarnated in a stage production, it would probably be similar to Mother. Mother (Zara Banks) is the world’s first fully conscious machine, created by A.I specialist Dora (Natasha Killam) under the moral supervision of The Professor (Zara Banks again). The Professor’s Christian faith is suitable foil for jousting philosophical, theological and ethical concerns about their experiment to advance A.I technology into the realms of God.

Writer Ian Dixon Potter has a track record of tackling such subjects. His previous production The Resurrectionist had Dr Frankenstein as the Victorian scientist playing God and, arguably, Mother too is something of a Frankenstein albeit one fully machine, fully conscious and with the universal power to take over the whole internet. To this end, ex-con and computer hacker Josh (Duncan Mason) lends his dodgy cyber skills for a couple of grand.

The heavy scientific jargon in the introductory scenes can become hard work where delivery gets lost in lab speak but the tense exchanges between Dora and The Professor keep it relevant to the audience. What emerges is an easily absorbed but enlightening discussion on the seemingly unlimited potential of artificial intelligence: Dora representing the utopian vision and The Professor the conservative voice of reason. Notably, she slaps down Dora’s insistence that Mother will liberate the working classes and poor by introducing a utopian economic system, declaring: “if you take away people’s work, they will have no focus, no, meaning”. The Calvinistic work ethic as expressed by The Professor!

The production seems a little stiff compared to the use of stage space and flowing set changes of his previous work The Resurrectionist. Perhaps, due in part, to the small performance space, and despite the strong performances of Banks, Killam and Mason. One senses room for more effective directorial touches to tie together this fluid and powerful script with the unique environment and seating set up of Kennington’s White Bear Theatre. Movement becomes a vital language itself when communicating to audiences in compact spaces and with the growing tension taking place in the confines of a poky lab it can actually become an asset that larger theatres would struggle to replicate.

The only other criticism is it feels a little truncated. You’re built up to expect a tsunami of A.I repercussions, either for good or ill, but are led towards the final third’s conclusion without fully exploring these questions. It wraps up too comfortably within the hour and comfort in drama is never a good thing. You’re left wanting more but that, at least, is always a good thing.

The Test runs at White Bear Theatre, Kennington until 30 September