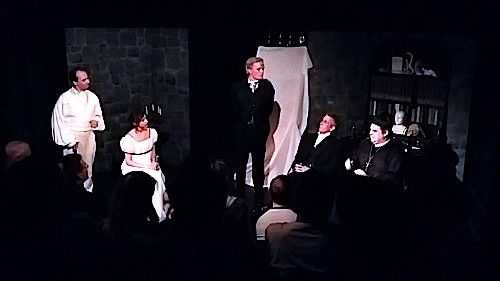 Review of: The Resurrectionist (Theatre)

In Greek mythology Prometheus stole fire from the Gods and spent eternity paying for his crime. His archetype is ‘resurrected’ in this Frankenstein-influenced play set in a gothic castle overlooking Lake Geneva. We know that the literati writing circle of Romantic poets Lord Byron, Percy Shelley and his wife Mary (who would go on to write Frankenstein), spent the long, dark nights in Geneva conjuring ghost stories, but in this play they are imagined in a new setting with a new Prometheus, the brilliant scientist Victor Darvell.

As homage would have it, Darvell just happens to have the same Christian name as Victor Frankenstein, a character created by Mary Shelley, who is also a brilliant scientist bent on resurrecting the dead. According to the theatre company’s marketing material this tale about Darvell is a true story. Unlikely. Scientists of the day may well have been experimenting with reviving limbs of dead animals using electric shocks (galvanism) but Darvell operates on another level altogether. This peculiarly handsome character is presented as a slightly androgynous Peter O’ Toole lookalike with a shock of grey hair and the righteous but scholarly air of an Enlightenment Age genius tortured by his own scientific discoveries. Actor Peter Dewhurst captures his pain, conflicts and passion in one of the stand out performances.

Mary Shelley (Samantha Kamras) isn’t on stage for long beyond the early scenes but makes the hairs on the back of your neck stand on end during these memorable openings featuring her and Lord Byron (Tristan Rogers). Byron’s servant has drowned during a swimming race with Percy Shelley and the ‘Mad, Bad Lord’ lives up to his name and reputation by dragging him all the way up to Darvell’s castle. Byron hopes the scientist will bring him back to life and this is where he and Mary disagree. The acting is first class and has both so fully engaged in characterisation you’ll feel genuinely scared listening in on this starkly lit environment. A double-take every now and again reminds you it is just a theatre. A packed, hesitant one, hanging on every word as the moral, religious and scientific arguments are fought over.

You’ll admire the way in which Lord Byron has been stripped of his legendary hubris. You expect him to be striding, gesticulative and arrogant, but here he is human and sometimes hesitant. Not the swaggering ladies man history has painted him to be. That’s still a surprise. Perhaps here he is a little unsure of himself in a spiritual sense, hence his lack of total disclosure. The same cannot be said of Pastor Cornelius, a man of the cloth intent on preventing the sacrilege of a potential Frankenstein creation in his village – or anywhere else, for that matter. Yes, science and religion in a good old Enlightenment Age tug of war with both seeking dominion over hearts and minds. A period in history when many a baying mob of that Age of Pisces had no grasp of the incoming Age of Aquarius and equated many of its scientific tributaries with the devil himself.

One mention of ‘baying mob’ and you could probably guess the ending. But Byron’s resurrected servant Blaize is not your typical Frankenstein being pursued by angry torch bearers. Blaize is playful, naïve, childlike, ponderous and sensitive. And continuing with the Greek myth analogy he is, in fact, the Appolline opposite to Mary Shelley’s gloomy Dionysian and destructive Frankenstein. Once the dead Blaize is brought back to life and commits his first act of violence he decides early on he doesn’t like it much. So his archetype has no further traction as a horror genre stereotype. Blaize’s little boy lost cadence has a lot to do with this.

The Resurrectionist, at The Etcetera Theatre, Camden until Oct 9th.

Tagged with:     The Resurrectionist, Theatre