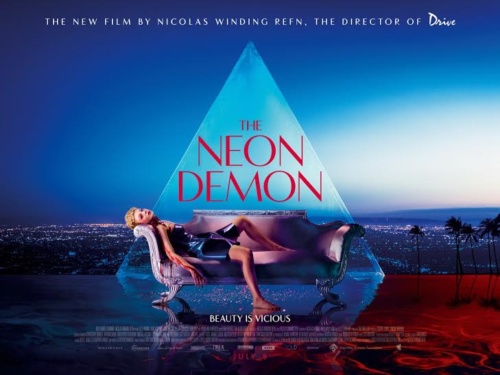 Review of: The Neon Demon (Film)

Most movies about the fashion world tend to overplay stylistic elements merely for visual effect. It’s just too tempting isn’t it? Danish writer/director Nicolas Winding Refn‘s surreal and macabre thriller about a fresh-faced model in a cut throat world (quite literally cut throat!) does not do this, although the dreamy slow-mos and deliberately anodyne character signatures might suggest otherwise.

Elle Fanning stars as Jesse an innocent looking teenager who heads out to LA just after her sixteenth birthday with high hopes of becoming a model. The stick-thin, lipsticked mannequin types with blank expressions and equally blank conversations she encounters there gives the film its ‘anodyne’ tone. Everything in this world is so friendly and inoffensive in a soulless sort of way that you get the feeling they’re all sharing the same drug, either that or are cast offs from 1970s robot movie Westworld. But this is intentional and gives the movie its unique feel. Within a few scenes you’re thinking if David Lynch directed a thriller-horror set in the fashion world it would be something like this.

Failure to see beyond the eye-candy cinematography is failure to see a powerful comment on a society where beauty is admired above all else. “Beauty isn’t everything, it’s all there is.” insists a know-all agency head during a tense dinner. This is after he has all but fawned over her after she has a successful casting for his shoot. It’s uncomfortable viewing to see him cast aside other picture-perfect models during this audition yet select her with his jaw dropped open simply because she has that small-town, virginal look. There are other elements throughout the film that make you feel uncomfortable. The garish neon lighting cast across their vacant, pretty faces, a wild cougar ransacking Jesse’s dingy downtown apartment, the film score of choral strings that descend into an almost lullaby-like mess of discordant beeps which will have you reaching to answer your mobile phone.

The characterisation is equally disturbing. Jesse, cherubic, wide-eyed under the bright lights contrasts with the oily, creepiness of the photographers, and ruthless ambition of rival models who pretend to be her friends but have already picked up on how hot she has become in the industry because of those Cara Delevingne eyes and teen looks. This in a working environment where you’re considered old at 19. In fact no one in this film is what you would class as ‘normal’. But what does normal mean, particularly in the fashion industry? Normal certainly isn’t refusing to eat food for fear of putting on a few pounds yet happily tucking into the eyeball of a rival model. Competitiveness is one thing, but cannibalism? In some ways it all makes sense. If models can’t eat because it effects their ability to get work which will then go to their more ‘happening’ looking rival then why not just eat that rival. Two problems solved in one.

Anodyne becomes gruesome pretty quickly when Jesse wises up and realises they’re not on her side. As a relevant side note, in one London cinema on the film’s opening day two middle-aged women exited the cinema, unable to watch any more – that’s how gruesome. Also her character has changed to fit her environment and she herself has developed a ruthless, colder edge which robs her of any sympathy from the audience when her comeuppance does come. This visually stunning film shows no let up in the ‘pretty’ department even when the credits roll. The beautifully framed LA landscape on the screen will have you glued to your seat from the first credit of ‘Ellie Fanning as Jesse’ right down to ‘3rd production runner’ and ‘best boy’.  A haunting masterpiece which will go the way of Marmite. Some will hate it some will love it.