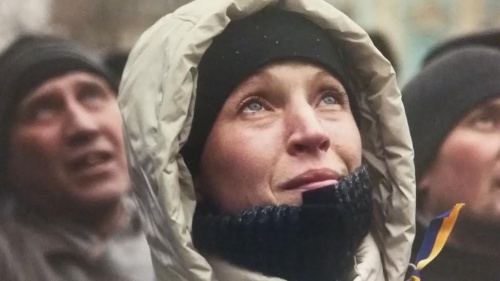 Running from 19 to 21st May The London Photo Festival brings together a diverse collection of work ranging from filtered and reworked pieces that look more like oils and water colours to more traditional photography. Although a London-based festival it attracted work from all over the world, sometimes capturing significant social and political events as they happened. The Ukraine uprising is strongly featured with rioters engulfed by blazing backdrops but also close ups of faces expressing grief and hope in equal measure.

Not to be overlooked are the more serene but no less outstanding snaps captured in fleeting moments – a tribute to the awareness and passion of the photographers. Spontaneity a key asset in framing events that may be lost forever. ‘Sunset on the River’ by Carol Fabrizio is a shot of the Virgin River in Zion National Park Utah which owes some of its painting-like feel to the photographer’s determination to use the light with immediacy in much the same way impressionist painters might have acted. She claims that while hiking she saw the sun’s reflection off the river producing something akin to water and fire. One might speculate that some kind of Photoshop filter may have accentuated this very effective oil on canvas look but it stands out in the exhibition for whatever method she used.

The beauty of spontaneity is also seen in Natasha Bennett’s Flight Over Water. Closer to home in Crystal Palace Park she seized the moment when a bird flew over the lake. She had gone there during sunset expecting the light reflecting off the water to produce something wondrous. And it did! However, this contrasts with ‘Blown Ashes’ by Celina Cabezas which is again timely but also tragic. A masterpiece of a photo but you’d would stop short of calling it beautiful because it captures the moment that the erupting Chilean volcano Calbuco swept the Patagonia landscape with dust that prevented animals from eating grass resulting in hundreds of them dying.

After you have viewed all the work the festival organisers ask you to vote for your favourite and you face a difficult choice. Take inspiration from the finalists from their previous Abstract Art Competition (photography) in February whose work is also displayed. The two exhibitions combined will give a greater appreciation of the depth of talent and the wide parameters of what one regards as photography.