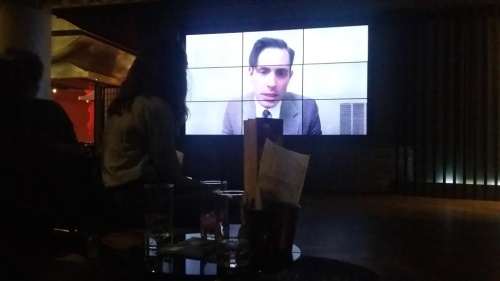 A Japanese restaurant on Kings Rd is an unusual and exotic location for a film festival but Benihana, Chelsea were the high-end, luxury orientated hosts you expected them to be and the plush surrounds were a much appreciated alternative to the typical festival circuit fare. Having said that, the Pomegranate Martini Cocktails at almost £12 a pop will probably have you teetotal within a swift couple of hours. The point at which they place a champagne shot next to your cocktail is the cue to file for bankruptcy.

The short films were a curious international mix with Ike Interviews God an example of the quirky selection. Written and directed by Eli Shapiro, it’s the tale of a hapless insurance clerk called Ike Simmons who has a direct hotline to God. God is a woman with an American accent who refuses to talk about religion and spirituality but happily shares tips on less worldly issues such as cooking. Apparently Ike is the Chosen One because he is Mr Average but just at the point at which the message of the Universe is about to be delivered there’s an untimely short circuit somewhere.

Doris by Oscar Rodriguez Gorriz will make Donald Trump shift uneasily in his campaign wagon. It’s about an over-worked, honest Mexican maid working for a well-off American family. There’s a grumpy old Pa to deal with but she soon realises that this racist, demanding man is the only sane person in the household. His brutal honesty is a refreshing antidote to their weaselly prevarication (they are constantly putting off the processing of her green card.) In fact it’s the old man who spills the beans that his son does not have her interests at heart and tells her she need to be a little less doting and a bit more self-interested to get on in life. He spits in the family milk bottle and invites her to do so. She holds off but by the end of the film she’s gobbing in their sandwich. Yuck!