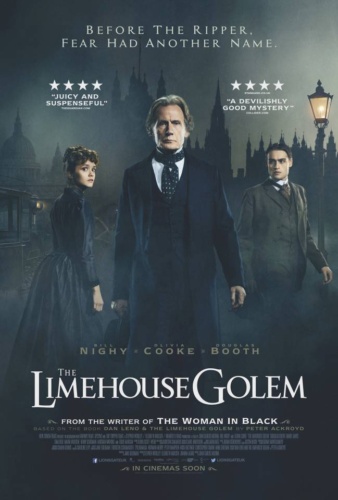 Review of: The Limehouse Golem (Film)

The setting of grisly serial murders in the Victorian East End will immediately conjure up visions of cobbled streets, cockney accents and a Jack the Ripper type concealing his crimes in those crime-ridden, poverty-stricken backstreets. The Limehouse Golem is so much more than a Ripper copycat but describing lead character Elizabeth Cree (Olivia Cooke) as a feminist heroine in director Juan Carlos Medina’s new slant is a step too far.

1880s music hall actress Elizabeth Cree faces the gallows for the poisoning of her husband and is also blamed for a series of gruesome murders in the notorious Limehouse district. Scotland Yard detective John Kildare (Bill Nighy) has been put in charge of this high profile case, not because of his undoubted deductive skills but because his superiors are seeking a public fall guy for this scandalous case and Kildare fits the bill. Described by his colleagues as politician-like, this is never meant to be flattery, more a condescending summation of an elegant, respectful, saturnine man whose career position belies his potential. But he’ll find no sympathy from his colleagues here. Regardless, Kildare’s early reluctance and trepidation disappears once he becomes sure of Elizabeth’s innocence; his mission is to prove this as much as catch the elusive Golem.

Cree is portrayed as a victim of her harsh upbringing with a mother so cruel you’ll wince in your cinema seat. Despite these early scars she is equivocally both a hard East End nut to crack and seemingly flowing with the milk of many virtues, loyalty to the point of sacrifice amongst them. She refuses to implicate her playwright husband with the suspect temperament even though he has guilt written all over him.

The mystery unfolds with one or two Victorian superstars cleverly presented as suspects alongside her – including the great Karl Marx himself. The big-bearded socialist philosopher is one of four who unfortunately happen to be at the British Library on the same date, same time as a vital clue. He shares the celebrity mugshot booth with novelist George Gissing who is tarnished by his penchant for marrying East End prostitutes. By the way, all the re-played murders occur from Sep 5th – 10th tying in with the September 1st UK theatrical release and adding suspense to the cinematic hourglass that’s unfolding.

With most of the drama centred around an East End music hall fronted by the camp and charismatic Dan Leno (Douglas Booth), the gawdy, grubby and heartening aspects of Victorian England are highlighted in equal measure. He and Cree soon become the most famous faces on the London stage but protective Leno warns her off marrying playwright Cree despite her admirer’s promises to make her the star of his unfinished masterpiece Misery Junction in return for her hand in marriage. Leno sees in him a man who will say anything to have his own wicked way, even by nefarious Victorian standards. Keeping up with the meandering plot twists that implicate Elizabeth Cree, her husband, and Leno in turn is a joy with such a masterful script but it’s not strictly a horror movie, although gruesome enough to draw praiseworthy parallels from the genre purists.

Tagged with:     The Limehouse Golem