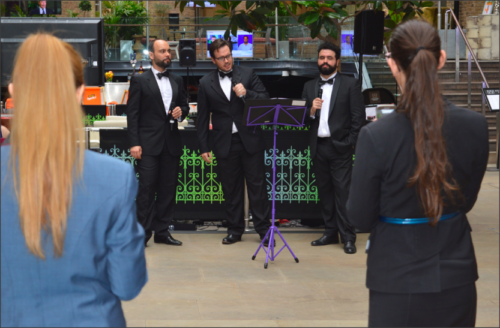 If the European Football Championships is a celebration of Euro sporting excellence then the Harlequin Euro Festival running concurrently celebrates European culture and language in a very different way. The soccer hooliganism happening in host nation France though is at odds with this five week programme of events in Devonshire Square, Liverpool Street which embraces more genteel customs and folk traditions from our European neighbours.

Taking its name from a 16th century Italian harlequin character called Arlecchino, the event organisers see his multi-coloured costume as representing multi-national, multi-cultural Europe. So if you can’t catch Spain v Croatia then catch a Flamenco performance by renowned music and dance act Flamenco Vision. If England v Wales was turn off then The London Welsh Male Voice Choir on June 29th will show you what happens when the two countries work together. Russia may have had an early exit from the football tournament but on July 6th the Cossack Show will offer a rousing Russian and Ukrainian traditional dance show as an alternative to all this competitive sport.

Earlier in the week internationally acclaimed tenors Sousa Leonel Pinheiro, Alberto Sousa and Alex Tsilogiannis treated all to a selection of Italian Opera songs, which did not look out of place beyond the realms of a concert venue as their powerful voices boomed around Devonshire Square keeping their lunchtime audience captivated.