The Force of Destiny by Verdi (Opera) 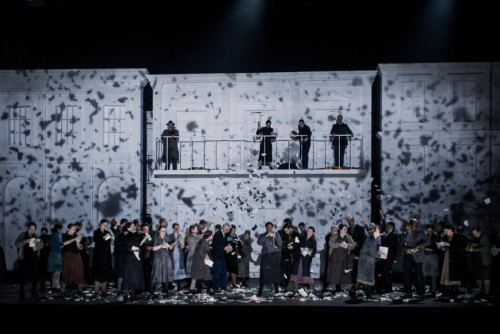 Review of: The Force of Destiny (Opera)

Many of Giuseppe Verdi’s operas explore relationships between fathers and daughters. His The Force of Destiny, currently performed by the English National Opera at the London Coliseum, explores the collapse and end of a relationship between a father and his daughter. The controversial director Calixto Bieito has produced a thrilling staging that is well worth seeing.

The work begins with the familiar overture. Through a cloud of dry ice, we see two figures silhouetted at a table. Gradually, the cloud clears and the lighting reveals the Marquis of Calatrava and his daughter Leonora. The Marquis thanks his daughter for respecting his wishes and not marrying a man he considers unsuitable. He retires to bed, not realising that his daughter is thinking of eloping that same evening.

Leonora’s beloved, Alvaro, arrives. He urges her to leave with him immediately. She is torn by her sense of duty to her father. The Marquis enters and denounces his daughter. Alvaro draws his pistol, which discharges accidentally and kills the Marquis. With his dying breath he curses his daughter.

The lovers escape but are separated. From here, the action moves from the private world to the public one. As is often the case in Verdi’s operas, characters find that their private problems are enveloped by more far-reaching conflicts. In this case Bieito places the action in the Spanish Civil War. As families are torn apart, so is an entire society.

Bieito explains in the programme how his grandmother told him of the mass killings in the Civil War. He depicts this on stage. The soldier’s widow Preziosilla exhorts troops, dressed uncomfortably like Franco’s Falangist party, to greater efforts. Later she is shown executing prisoners with a bullet in the back of the head.

Believing Alvaro to be dead and wracked with guilt over her father’s death, Leonora applies to a monastery for permission to be allowed to live as a hermit. She is humiliated by having some of her clothes removed and her hair cut short.

Alvaro believes Leonora to be dead and has enlisted in the army. He befriends Carlos, who unknown to him is Leonora’s brother. He has sworn to avenge his father by killing his sister and Alvaro. The badly wounded Alvaro entrusts his possessions to Carlos, who discovers his identity. Later, they fight a duel but are separated by soldiers.

Alvaro joins a monastery, not realising this is where Leonora is sheltered. One of the monks is shown callously refusing to give bread to the starving refugees. Carlosarrives, goading Alvaro to resume their duel. Alvaro mortally wounds him and cries out for help. Leonora, who is so guilt-ridden that she wishes only for death, rushes in. She bends over her dying brother, who stabs her to death. Alvaro lives but will always be tormented by witnessing Leonora’s death. None have escaped their fate.

This isn’t the most cheerful of works but is superbly staged and extremely well sung and played. One or two moments seem rather under-stressed, for example Alvaro’s entrance in Act 1 could be more dramatic. In Act 2, the soldiers ask for food and instead are shown tearing up books. The relevance of this is unclear but perhaps it was a reference to book-burning in Nazi Germany or Fahrenheit 451. Otherwise, it’s hard to fault the staging.

Tamara Wilson, making her debut at the ENO, gave an outstanding performance in the role of Leonora. Her voice rose gloriously above the chorus in Act 2. Also making her house debut was RinatShaham, giving a spirited, committed performance as Preziosilla. I hope we hear both of them again soon.

Gwyn Hughes Jones is a natural in the role of Alvaro, his voice reaching the high notes effortlessly.   Also worthy of mention is Andrew Shore’s portrayal of the monk Melitone, alternatively comic and sinister. Last but not least are the fine playing of the orchestra and the superb conducting of Mark Wigglesworth.

There are just two performances remaining, on December 2 and 4. There are plenty of tickets available (especially on the 4th) and you may be able to get one for a substantial discount at the Half-price Theatre Booth in Leicester Square. I purchased a stalls seat, normally £115, for just £30. Go on, treat yourself!