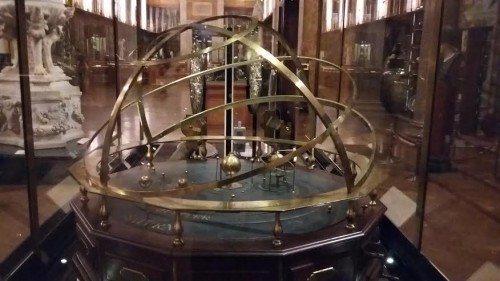 The Enlightenment was a period of 17th and 18th century European history when mythology, faith and superstition were challenged for the first time by philosophers and thinkers driven by logic, science and empirical facts. It was a significant departure from the established order and included questioning the authority of church, monarchy and state. The Enlightenment Tour at the British Museum is essential if you are to make sense of this because it is not a clear case of black and white reasoning. Many grey areas exist.

After meeting outside the Enlightenment Room (Room 1) at 6.30pm you are led into a huge exhibition room which looks a lot like the grand lounge of some 18th century lord because of the wall to wall cabinets of encyclopedia type books and the Greco-Roman statues dotted everywhere. Even the architecture has that grand, aristocratic feel and its certainly easier to pick up on the atmosphere of the period because of this. And as if to affirm this we are eventually informed by the tour guide that not only was this room originally called the King’s Library but also designed in a neo-classical style by architects. Notably, many of these statues and busts are in honour of the numerous, distinguished patrons, donors and collectors who contributed to this classification of the world, such as antiquarian Martin Folkes (1690-1754) and Sir Robert Bruce Cotton (1571-1631).

Much of the items were bequeathed from the collection of the museum’s founder, botanist Sir Hans Sloane who originally kept all of this stuff in his house! (Now what was that about the room looking like a nobleman’s home?) In fact his home at 3 Bloomsbury Place became so over-stuffed with exhibits he had to buy the house next door as well. As you do! Yes this is one rich and powerful man, he eventually bought the manor of Chelsea and if that isn’t enough Sloane Square was named after him.

Exhibits include Newtonian prisms used for theories of light and colour, a mechanism called an Orrery which demonstrates Copernicus’ theory on orbiting planets and a variety of telescopes marking developments in astronomy. Scientists such as Charles Darwin and Isaac Newton made their mark during this period and you can imagine Darwin’s theories of evolution being regarded as tantamount to heresy. But they refused to see any area as beyond their bounds and outer space, particularly, was no longer the final frontier. Peculiar devices such as the astrolabe shows this obsession with quantifying the once sacred and untouchable heavens. This instrument provided accurate measurement of stars and constellations and was also used for everything from time-keeping to surveying.

One strange observation is the large amount of Greco-Roman items. Yes, the grey areas I mentioned earlier because here in this exhibit room of reasoning and logic are statues from Greek mythology. Your first thought is ‘hang on a minute, I thought we’re dealing with the 17th and 18th centuries here?’ You are, but the whole point of the exhibition is to allow you to see the world through the eyes of the collectors of the age and they regarded ancient Greek culture as the ideal type of art and beauty. So these were the types of items they often sought out. The most intriguing thing about this Enlightenment Tour is this mix n’ match feel which is unrivalled anywhere else in the British Museum. Their very own take on post-modernity, perhaps arriving a century or two earlier than scheduled.

The Enlightenment Spotlight tour runs every Friday at 6.30 and 7pm and lasts 20 minutes. The exhibition will be closed  January 12 –  January 24, 2016 for maintenance work.