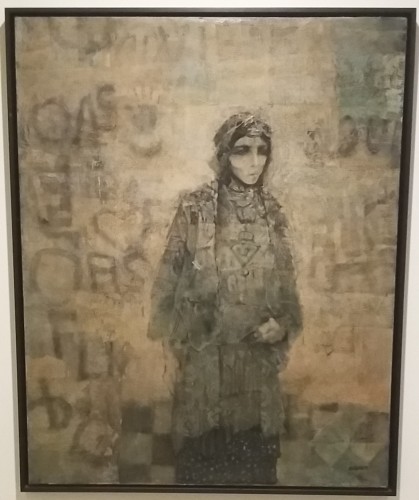 In a mammoth programme from September 2015 to Jan 2017 the Whitechapel Gallery hosts the Barjeel Art Foundation Collection in a series so big it requires four separate exhibitions. This is the largest exhibition of Arab art ever held in the UK and comes from Sultan Sooud Al-Qassemi’s UAE based archive of work sourced from the 1900s through to today. There are 60 artists involved from all over the Middle East and North Africa each presenting their own unique take on Arab life.

The first exhibition in the series is Debating Modernism I (8 Sept – 6 Dec 2015) but barely a week will pass before Debating Modernism II (15 Dec 2015 – 17 April 2016) takes its place. There’s still time to view the first and oil on canvas Le Gardien de la Vie (The Protector of Life) immediately catches the eye. The centre ground of the work is held ominously by a machine gun toting, turbaned figure towering over a wedding party. The chalky colours are both bright and subdued – a strange, slightly mesmerising juxtaposition which sets it apart from the other paintings and actually makes you peer closer to check whether it is, indeed, an oil painting.

Egyptian social realist painter Hamed Ewais completed it in 1967-8 when the country was heaving with dissatisfaction with autocratic rule and during the Six Day War with Israel. Ewais committed himself to art that represented the struggles of the working class and eventually co-founded the Group of Modern Art which fought for the modernisation of Egypt.
Algerian artist Mohammad Issiakhem’s Femme et Mur (Woman and Wall) is similar only inasmuch as there’s the double take on whether it’s an oil or charcoal depiction – but not as strikingly as in Hamed Ewais’ work. Here the sullen, hollow cheeked female wearing a head scarf is almost ghost-like, it’s that saturated. There’s a hint of the gold and green palette base but now with the life-force drawn out of it so that she becomes one with the charcoal-like graffiti scrawled on the walls behind her. The exhibits are varied and not bound by expressive common threads.

For pure abstraction Shafic Abboul’s Untitled (1966) challenges the viewer to make sense of its copper-orange vortex of expression. A hint of a female figure in the foreground and the blobs and dabs of yellows, golds and cerise reds around that vortex suggest the uncompromising heat of the desert. The sun’s life force without mercy with little room for one to focus one’s eyes in its harsh glare to make out figures closest to the viewer.

My particular favourite is Assouan by Egyptian Ragheb Ayad, with its hard, geometric lines it depicts a colony of workers toiling in a quarry of some sort. Cubist in influence I like the way that once you get past the cold, stone-like (steel-like even) quarry environment in the foreground there is the reward of the richer orange hues of the evening and sunset at the close of a working day. The only problem is that this promise land seems so far away and even in that orangey distance the workers never stop working so there is no salvation in completion. It symbolises, no doubt, not only the desert terrain but the meaninglessness of back-breaking work. The figures are ant-like and tied to their labour to the extent to which it could easily depict a prison labour camp. It is worrying that the distinction between free existence and confinement is a difficult one and also says a lot about modern 9-5 life in the East and West.