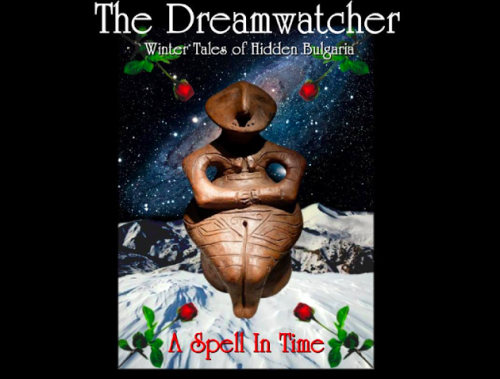 Review of: The Dreamwatcher: Winter Tales of Hidden Bulgaria (Drama)

In the run-in to the festive season if you were looking for a Christmas evening with a difference, with that unique cultural edge, I have to inform you that you’ve just missed it! British-Bulgarian storytelling performance company A Spell In Time performed The Dreamwatcher, Winter Tales of Hidden Bulgaria to a packed audience at the Bulgarian Cultural Institute, South Kensington and everyone can vouch for the fact we were all held spellbound (no pun intended) by the mixture of folk lore, traditional ballads and Bulgarian choir-song.

It was my first introduction to Bulgarian performance but A Spell In Time has been going since 1995, formed by half Bulgarian Moni Sheehan, its enchanting, charismatic storyteller with musician Ivor Davies weaving his way through her mesmerising narrative. Their work has been performed on BBC World Service, BBC Radio Sheffield, BBC Radio Shropshire and Bulgarian National Radio as well as countless festivals and events. They currently stand alone as the UK’s only Bulgarian storytelling company.

These tales have now been translated into English for the first time which you might expect to be a difficult task because much can be lost in the cultural crossover but Paraskeva Armstrong and Moni Sheehan have covered all angles. On arrival warm-hearted Bulgarian hospitality starts as soon as you’re in the door with the breaking of traditional bread and the invitation to dip it into honey – all before you take your seat. Then Moni Sheehan graciously thanks the attendees and begins the first of these epic tales. In Doichin’s Wedding a suitor seeking a maiden’s hand is set impossible tasks by her clingy parents, the easiest of which is to find 3000 wedding guests and the hardest of which is to  milk a thousand goats and drink the vat of content in one go. (Sheehan drops in a joke about a comparable amount of brandy being an easier challenge for some men. It is Christmas don’t forget!).

This is followed by ‘Milen And The Stag’ a poetic tale about a protective mother’s love for her son and his desire for greatness and perfection resulting in him being transformed into a magnificent stag who one might compare to the Greek God Atlas himself as he seems to have the very heavens on his back. The glory of Atlas’s stature is also the burden he must bear and similarly Milen’s new form as a stag is a burden to his mother at least. She bemoans his new form and says it is tantamount to him abandoning her. 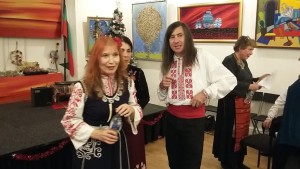 After the interval the London Bulgarian Choir perform a number of heartwarming songs with lead vocalist Dessislava Stefanova achieving a feat of vocal gymnastics that has you wanting to applaud before the song is finished. And after that the Traditional Bulgarian Christmas Blessings are offered to both men and maidens regardless of age because according to lore “every woman is a maiden today.” In Bulgaria the Koledari are carols singers who similarly offer blessing songs to every member of household’s they visit, ending each blessing with “Da bude” meaning “Let it be so”. And so it was with us – ending this celebration of culture with both a blessing and a night of Christmas entertainment to remember.

The Dreamwatcher: Winter Tales of Hidden Bulgaria performed by A Spell In Time at The Bulgarian Cultural Institute, Queens Gate, South Kensington on December 16th.