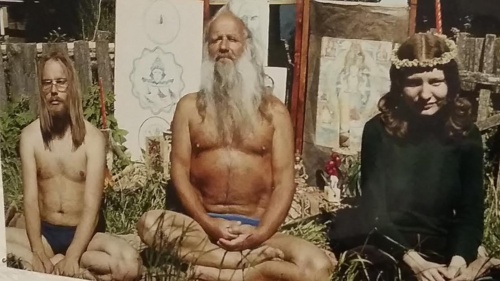 During the Cold War era of the 60s when President Brezhnev was locking horns with his liberal, free thinking arch enemies in the West, the first signs of a counter culture that dared to be even more free-spirited than democratic capitalism grew out of the music, art, fashion, poetry and world love philosophy sweeping Western Europe and North America. By the 1970s the influence of The Beatles’ Sgt Peppers psychedelia and the love-all vibe of the Woodstock Festival had permeated even Soviet society. The Soviet Hippies exhibition at The Red Gallery, Shoreditch captures that fleeting but nonetheless culturally significant period where inhibitions fell away well before the Iron Curtain came down.

During the 60s Estonia was the most progressive of Soviet satellites in this respect so came to be known as the ‘Soviet West’ where hippy culture thrived. The exhibits include photographs of the Soviet Union’s first psychedelic rock band Keldriline Heli on stage in Viljandi, southern Estonia and also gig posters for other leading names in the Estonian rook movement such as Ruja, the country’s first home-bred rock band and fellow countrymen Alfa from Tartu performing in 1968. Continuing with the trail blazers, there is also a photo attributed to Soviet Estonia’s greatest guitar player Andres Poldoo hitting those licks with experimental prog-rock band Psycho.

Although Western psychedelia was expressed through this rock music, more often it was found in safer mediums such as animated books and poster art which was less likely to offend the authorities. Many of these on display such as Aili Vint’s Yellow in Blue Like Sun in Sky are actually illustrations from children’s books. You can’t get more harmless than that!  And all playfully mimicking the drug-induced, LSD-laced creativity which had floated all the way from Liverpool’s Strawberry Fields to the Steppes of Russia.

However, the KGB still felt uncomfortable with this new philosophy gaining pace amongst the youth and to thwart it’s popularity in 1971 staged a mass arrest of hippies who had gathered at their favourite hang-out ‘Psychodrome Square in Moscow brandishing anti-war slogans. This crackdown is commemorated to this day by Estonian hippies who take to the road to Tsaritsino Park, Moscow where they gather under a pine tree for a pilgrimage of sorts. The problem back then was hippy pacifism was at odds with Soviet military conscription programmes and therefore undermined the region’s security. A displayed book on Schizophrenia titled Skisofreenia and with opening poems by Estonian hippies Peti to Poja (1976) highlights this conflict of values in a depressing way.

Since faking mental illness was a sure way of gaining exemption from military service these hippies became bookworms overnight when it came to schizophrenia, psychopathy and bipolar disorder. Others happily booked themselves into insane asylums to dodge the draft. This exhibition will open your eyes to how youth in the East battled to embrace the 60s free love philosophy. Inevitably, an explosion of colour is to be expected at any galley event dealing with smiley hippy culture but dark clouds gathered beneath the psychedelia.

Soviet Hippies runs at The Red Gallery, Shoreditch until Sept 18.