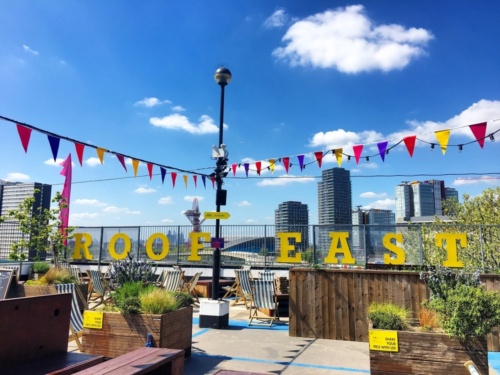 We venture east of the capital to the Borough of Newham for Stratford’s amazing skyline attractions.

Stratford is still basking in the glory of a successful 2012 Olympic Games. Seven years later, the regeneration of the area has made it an undeniable hot-spot with bold new sculptures and rooftop wonders, from bars to pop-up cinemas. Here are some unique, must-visit attractions that tower above the city and give a stunning view of the capital’s skyline.

ROOF EAST is Stratford’s best kept secret but its multi-coloured wonderland look suggests it’s hardly the Borough of Newham’s shrinking violet so one can only guess that it’s the rooftop location that’s keeping it hidden away. That hasn’t stopped it from becoming super-popular particularly during the summer months when visitors can check out its beach party vibe, which includes cocktail bars, roof top cinema, bowling lanes and crazy golf. It’s found on the eight floor of the multi-storey car park in Stratford Shopping Centre and has the potential to steal the limelight and footfall from Westfield just across the road, once word gets out. 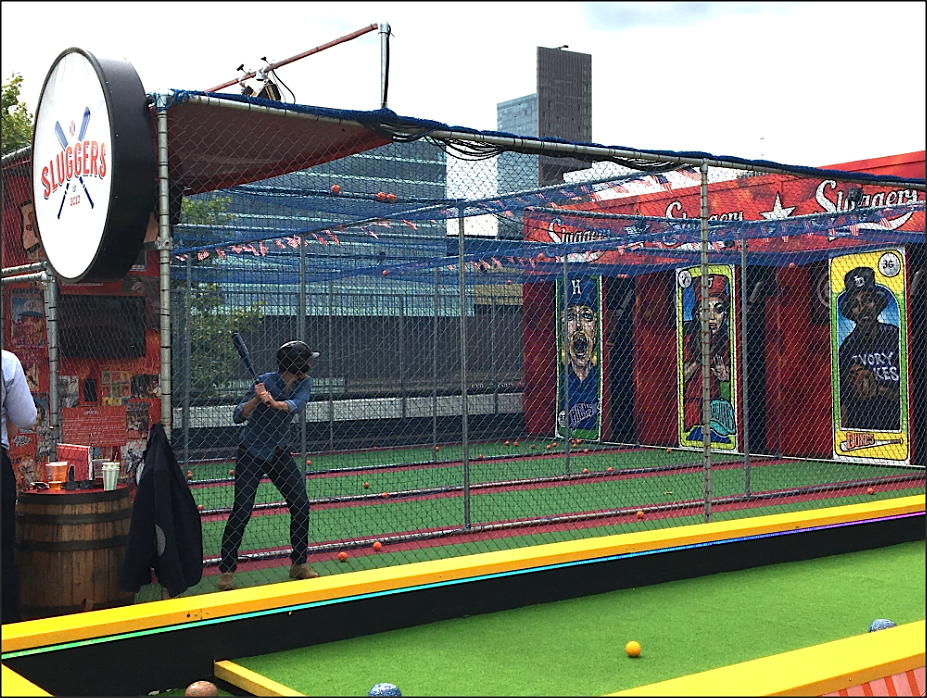 It’s a beach front Stratford-style. Deckchairs instead of conventional seating and oak-look tables on warehouse pallet supports which compliment the area’s blue collar roots. The East End tower blocks looming on the skyline do a good job of that as well. There’s also the unmissable ArcelorMittal Orbit Tower and the Olympic Stadium. 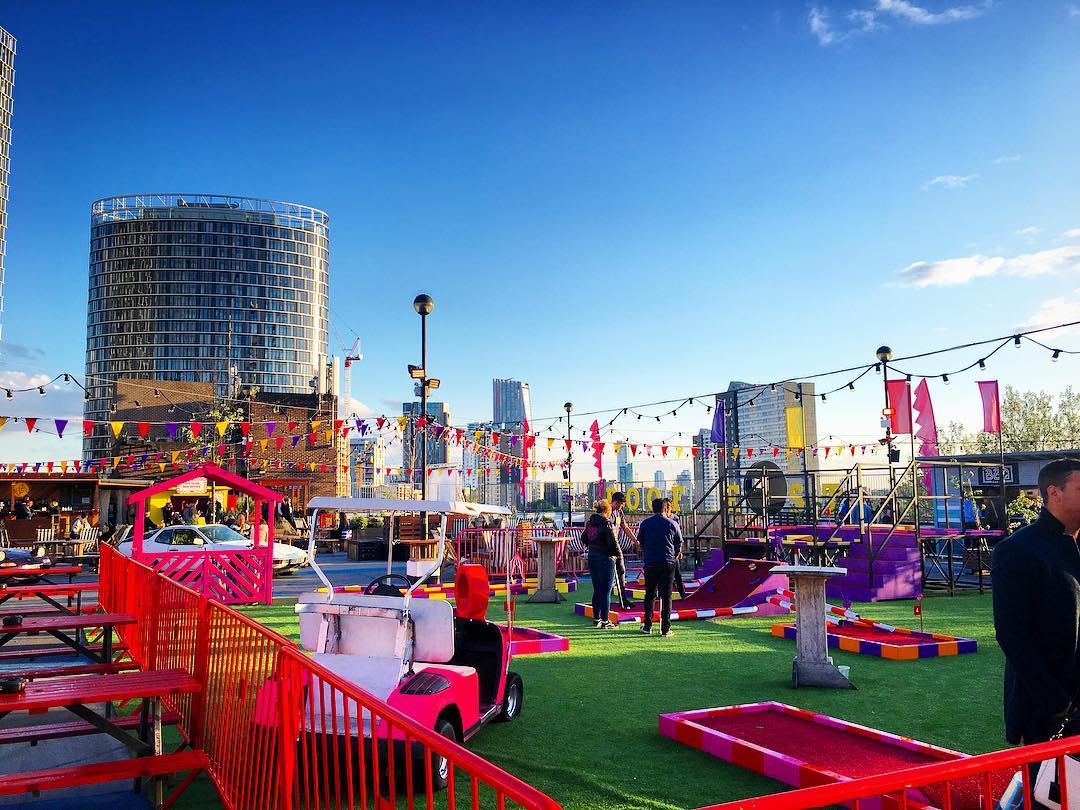 Disused sports cars are now design piece vases sprouting huge plants and even trees. Some of these vehicles are in eye-catching colours like purple, in line with the candy store look and complimenting the playground-for-adults vibe. The House of Foos is similarly vibrantly coloured. It’s the UK’s first and only VR football experience and combines traditional football with the table variety. 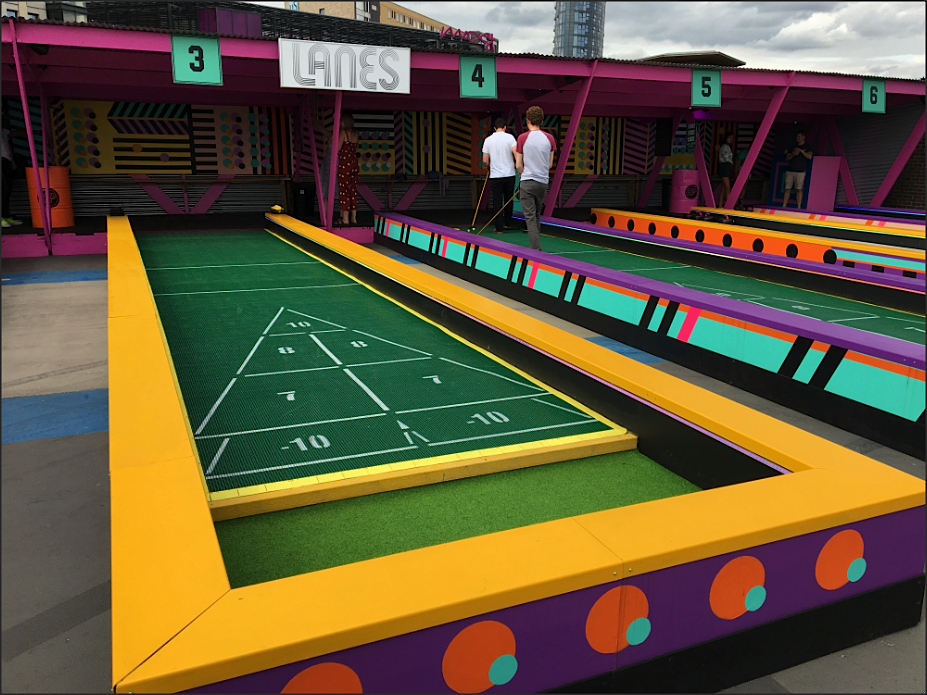 Roof Eats offer a selection of street food from the likes of Kolkati, whose North Indian bites are deliciously prepared in the open-air with the smoky, in-house cooking on all stalls spiking your appetite whether you came to eat or not. Eat Chay’s Dumplings & Baos stall serves Vietnamese and Korean cuisine and specialise in a steamed bun called a bao with a filling which at first delightfully deceives as thinly sliced meat until you realise this is a vegan bar! The meat-like seitan in bulgogi sauce is also the filling in their range of banh mi baguettes. RoofEast opens Tues-Fri 5pm-11pm Sat-Sun 12pm-11pm

THE ARCELORMITTAL ORBIT TOWER is larger than the Statue of Liberty and the centrepiece attraction in Stratford’s Olympic Park. Back in 2009, Anish Kapoor and Cecil Balmond won the contract to design a structure fitting enough to celebrate the Games and leave a cultural stamp in the heart of East London. It’s named after the largest steel and mining company in the world and took 84 tonnes of their steel to create – 60% of it recycled.

Its famous slide is the longest and tallest tunnel slide in the world and created by Kapoor, Balmond and Belgian artist-scientist Carsten Holler. The slide weaves round the tower 12 times and Holler describes it as “somewhere between delight and madness” and who would know better than its creator! Although already world-renowned artists before the Games, the Orbit Tower made their reputations soar, with Kapoor awarded a Knighthood a year after the Games. 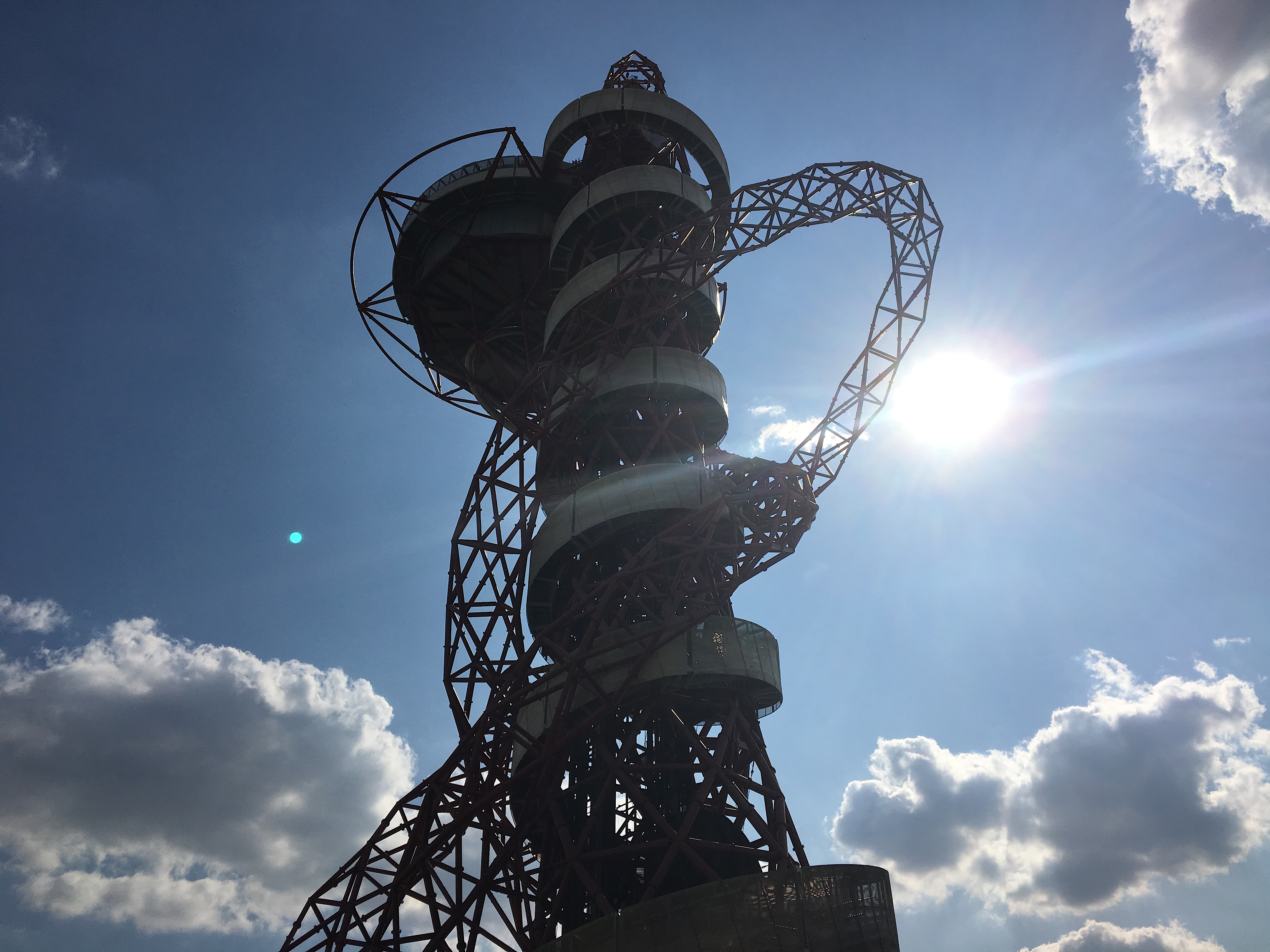 Exhibition displays around the entrance and foot of the tower inform about the magnitude of the project from inception to construction – and 2012 opening ceremony. There are photographs of the 2006 slide at it’s London test site and the Queen’s visit during the Olympics. She’s standing in front of Kapoor’s wobbly mirror sculpture on the top floor, facing its skewed reflections with a slightly amused expression. Even in the elevator taking you up to the eight floor there are reminders of this record-breaking feat of construction and all strategically placed to stoke your anticipation. For example, did you know that the tower is as high as 954 drinks cans placed on top of each other? Handy information. 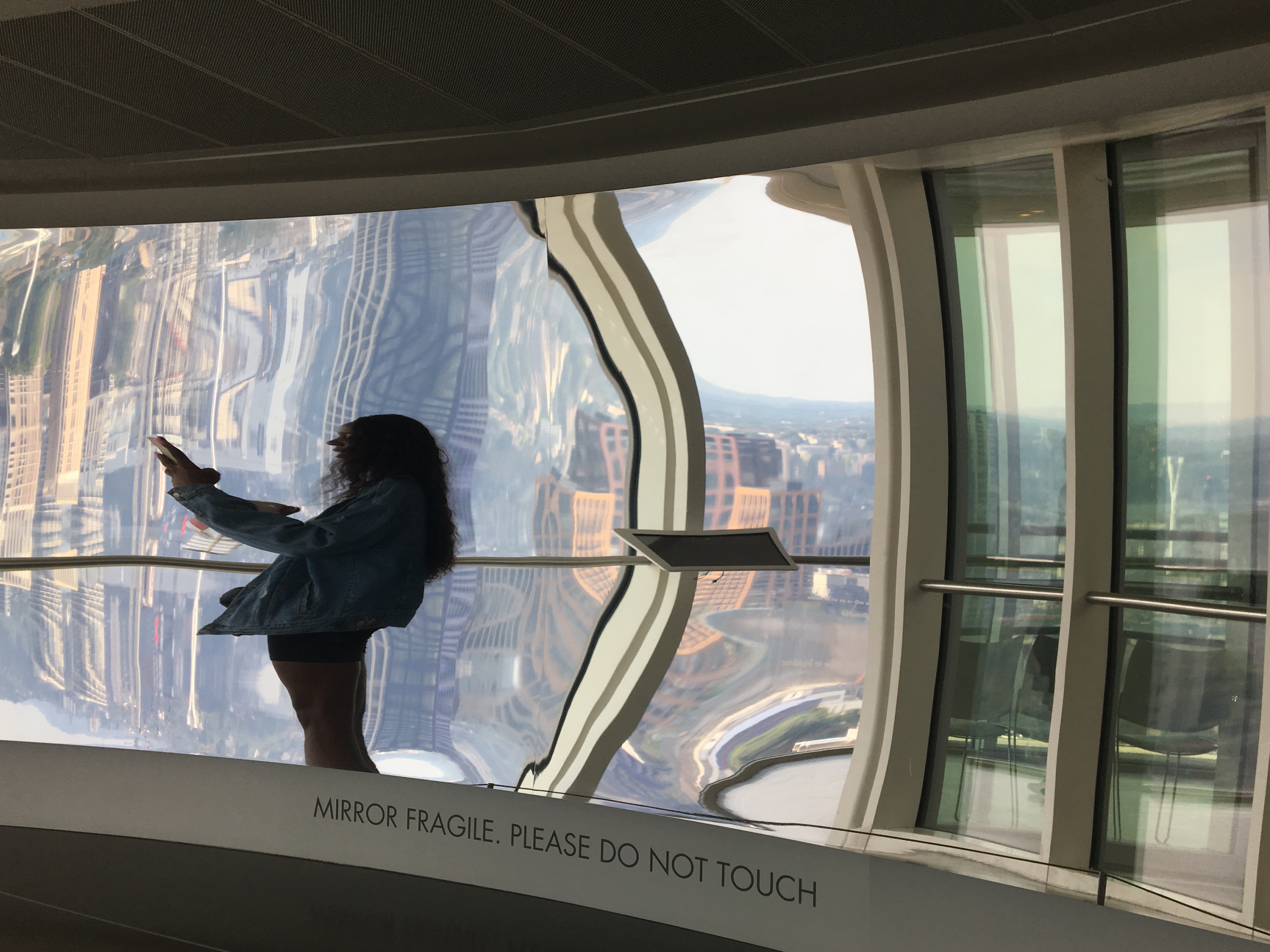 The views from the top are stunning, with the Olympic Stadium (now West Ham’s home ground) immediately noticeably. A banner in the stadium, reads ‘This is the world’s stage’ and from those dizzy heights you’d find it hard to disagree. It could easily refer to either the tower, stadium or Stratford itself. Apparently, you can also see London’s other soccer stadiums: The Emirates (Arsenal), The Den (Millwall), The Valley (Charlton) and the Matchroom Stadium (Leyton Orient) but in reality you’ll struggle to pinpoint them unless you’re a dedicated fan. 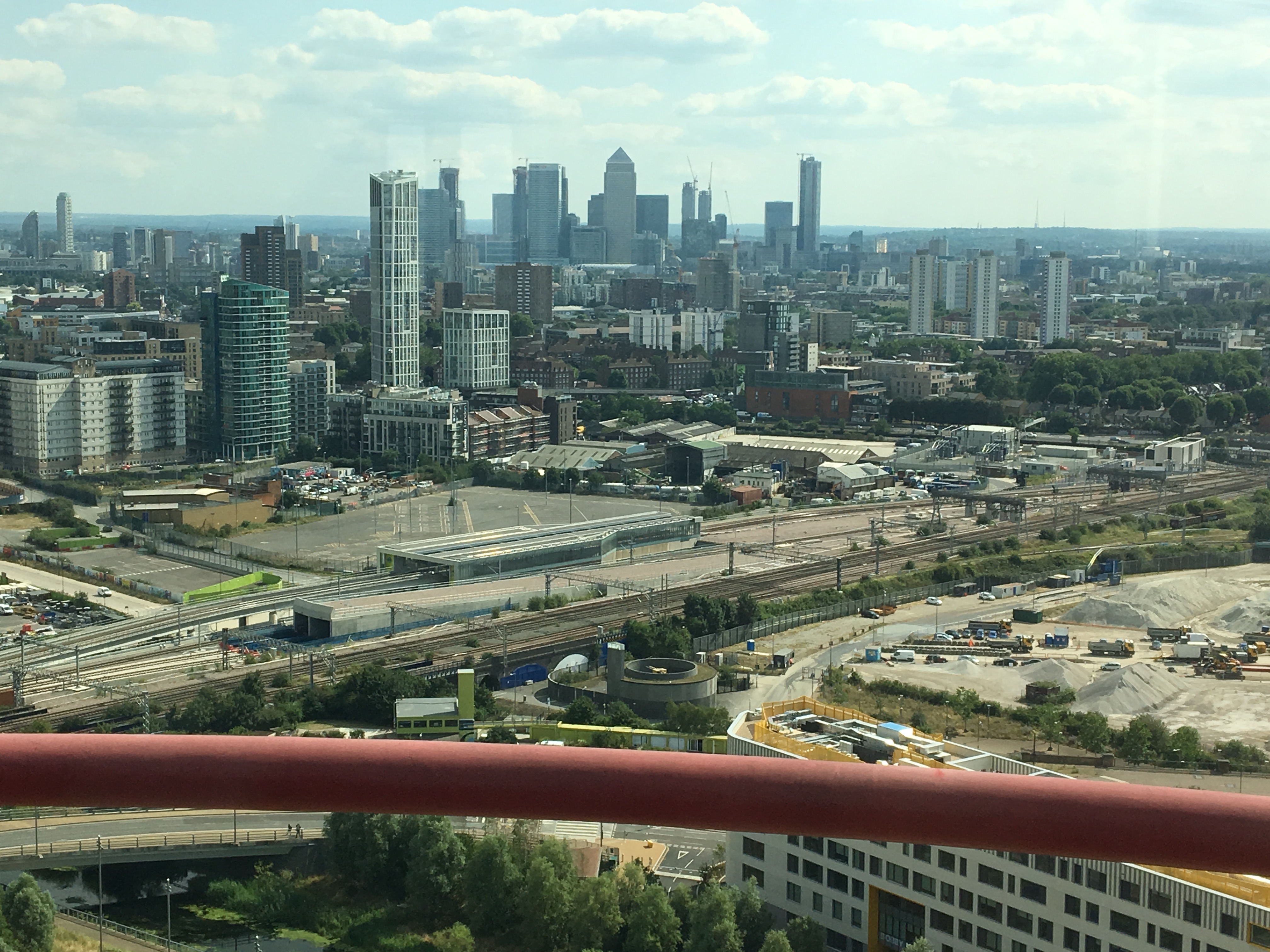 With so much to take in, it can feel both exhilarating and overwhelming but don’t worry, there are display boards which inform on the sights to pick out. We are informed that the Lee Valley VeloPark to the north is the world’s only venue for road cycling, track cycling, BMX and mountain biking. Its rolling roof and red structure make it amongst the easiest to see.The Copper Box Arena is also worth looking out for. Notably, it’s the first UK sports venue which is lit purely from natural sources. There are 88 light pipes fitted to the roof which draw in natural light. The Arena also has rain collectors on the roof – not dedicated staff running around with umbrellas and buckets but a specially designed rainwater harvesting system. All this considered, the top of the tower is the perfect place to see where and how East London in general and Stratford in particular is leading the world. ArcelorMittal Orbit opens Mon-Fri 11am-5pm, Sat-Sun 10am-6pm