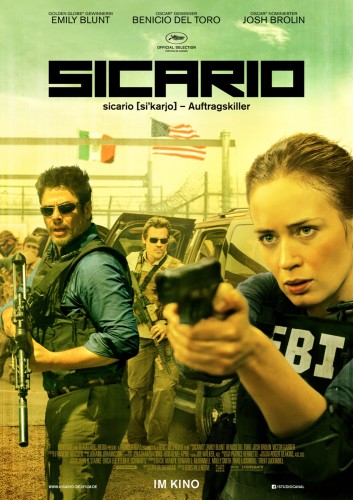 Denis Villeneuve’s newest film is an action packed thriller whose intensity gives the audience few moments to catch a breath. This movie is an adrenaline fuelled craze that will keep your eyes clued on to the screen, with a score by Jóhann Jóhannsson that will accentuate even further a sense of imminent doom as we follow Kate Macy (Emily Blunt) into the heart of darkness of the drug war between the Mexican cartels and the US.

The film opens with a literal Ooomph! The cinema shakes as bodies are recovered from a cartels save house in Arizona followed by an exploding shed. Kate Macy is then hand picked to work with a specialized unit who cloak their identity and mission in mystery, baiting her with her desire to revenge her colleagues and bring justice to butchers. Yet soon she discovers her youthful idealism isn’t the right place for this kind of war. As one of her bosses Matt Graver (Josh Brolin) points out, the lines have been shifted, what wasn’t acceptable is now fine with everyone in the justice department (or CIA as Kate finds out later).

Kate has problems adapting. At first she comes across as a strong female lead, yet in the end she doesn’t live up to the viewers expectations. Instead she seems to be washed away by the brute force of the operation, the blurred lines between right and wrong, legal and illegal. In the end Alejandro (Benicio del Torro) steals her thunder as the ultimate morally grey agent who has lost his soul years ago somewhere along the way to revenge his family, that has been killed by the Narcos.

The end is somewhat removed from the beginning, yet still strong with killer lines and scenes. One wouldn’t want to miss it. The action, however, makes up for the initial lack of Kate’s character arch. All the main actors, Blunt, Del Torro and Brolin, each find their authentic ways to bring their characters to life and draw the audience into a world of extremes as the Narcos push on Juárez and the border towns.

Whilst the movie isn’t the realistic portrayal of the Drug War as it would like to have been, it still comes close. The action packed scenes, however, bring home how severe the situation has become and how much the violence has escalated. Whilst scenarios such as mutilated bodies do happen regularly in Juárez, there are certain scenes that require the audience’s suspension of belief, they are thrilling, well shot and choreographed, making ’em great shots for an action flick. One of them is the a scene of a convoy where one of Kate first mission is to cross the border to pick up a boss from a high security prison, but they get stuck in traffic just as they re-enter the US border, a shoot out occurs in close range space with civilians all around them. A thrilling, nerve bending scene. However, one can’t help wonder why they simply didn’t hop on to a helicopter.

The movies absolute strength, however, is the film’s cinematography. Some scenes could be included in textbooks; the Coen brothers need to watch out! Villeneuve is coming!

All in all Sicario is a breath-taking movie, whose flaws are easily over looked when considering the whole picture. A film that keeps you on the edge for a good two hours.