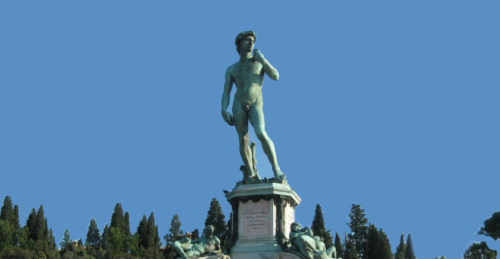 Exactly 512 years ago Michaelangelo’s statue of biblical hero David was unveiled in Florence, then the spiritual heart of the European Renaissance and this its undoubted signpost and centrepiece. And that was on this day September 8th, today auspiciously falling on a Thursday, a week day now synonymous with art appreciation and private views across the capital. So with both of these occurrences in mind it is a timely opportunity to discuss how the David and Goliath analogy can be found in London’s blossoming art scene.

Many of the artists busy organising their previews and exhibition launch parties today obviously cannot match either Michaelangelo’s monolithic status or that of his David sculpture but the post-modern nature of today’s work often means that traditional materials and processes can be resourcefully overlooked. Back then in 1464 the cream of Florentine artistic talent was commissioned to carve the biblical hero from a marble block. When one of the sculptors pulled out Leonardo da Vinci himself was called upon to oversee the commission – although da Vinci stopped short of committing to do the work himself, offering only his guidance. Eventually the 26 year old Michaelangelo was selected. Two heavyweight names, no doubt about that!

And throughout history it was often these religious, state and royal patrons who controlled most of the meaningful commissions. Obviously art thrived beyond this but inevitably lacked the economic power and guaranteed publicity of these high society contracts. As the centuries passed the art business became even more fragmented allowing in the entrepreneurial artist and artisan who blossomed on their own merits. A example of this in more recent decades is the 1988 student exhibition Freeze organised by a Damien Hirst few people had heard of before he later catapulted these artists into the public consciousness. In truth, the YBA (Young British Artists) movement was born from that one show, well before Hirst’s and Saatchi’s more well-known Sensation show in 1997. And the YBAs continued to go by that name even when they got old!

Compare this to the fanfare and pomp of the statue of David. Imagine in 1501 the cathedral guardians of the Santa Maria Del Fiore casually commissioning one of 12 statues for the cathedral roof with each weighing six tons. A panel of 30 super-powerful Florentines convening to debate every development, including the oversight that it was way too heavy for the roof. This then was the reality of power-play during the Renaissance.  Even as it was re-located in the Piazza della Signoria, the statue’s double-meaning became underlined. It became symbolic with the economic might of the mightiest as well as the triumph of the little man that the biblical David story came to represent.

By some irony the passage of time has resurrected the David story in the work of the lesser known artists who thrive beyond commissions and patronage or at least eventually get them without the privilege of birth or social circle. Go to any gallery in London and you will see a potential David waiting in the wings.