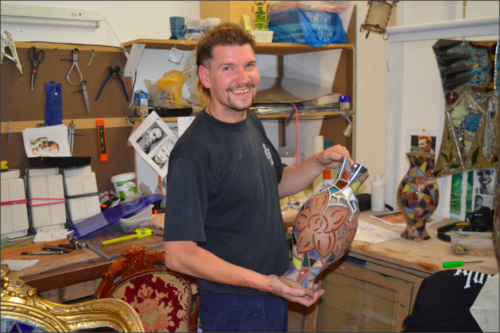 An artist’s 9-5 job can often be the inspiration behind some of his greatest creations away from the daily grind. Mile End-based artist Stanislav Geissler’s journey as a sculptor has taken him from his homeland of the Czech Republic where he worked as a panel beater and he is now resident in London employed as a dustman. His current job means that found objects inevitably figure in the stunning stain glass sculptures he has fashioned in a style inimitably his own. It’s intriguing how these fragmented found pieces which are ‘of the earth’ come together in the assembly of sculptures that are ‘of the Universe’.

By 2014 he had created enough of these works to put together his first ever exhibition The Secret In The Moment at Mile End Art Pavilion, which ran from 26 Feb-02 March and featured his ceramics, stained glass sculptures and paintings. His fascination with the forces that shape existence and drive humanity were ever present as he evolved into a conscientious artist working away in his Greenwich studio trying to capture the essence of Man. From his Greek mythology inspired sculptures such as the Nativity of Aphrodite, to the more esoteric The Original Substance there has been a sense that his artistic journey is also linked to both personal growth and wider discovery.

His sculpture The Original Substance is a great example of his ability to intuitively tap into these unknown realms without fixing a firm scientific hat on them. This work represents the first building blocks of the Universe –  to some it is physic’s sub atomic particle to others Hindu prana. Yet its elusive quintessence is certainly beyond man’s knowledge at this point in history and accessible only to the artists, poets and mystics who operate on a level of consciousness above material reality.

Indeed, it is science that has all the catching up to do. In the last 100 years physicists have agreed that sub-atomic particles act in an almost ‘supernatural’ way that defies the accepted laws of science. They move back in forth in time and can appear whenever and wherever they want with no respect for what we commonly regard as ‘natural’. To grasp this mystery in all its primal glory Stanislav, undoubtedly, must have tapped into a quote by the greatest physicist of them all. Albert Einstein once said: “Logic will take you from A to B. Imagination will take you everywhere.”