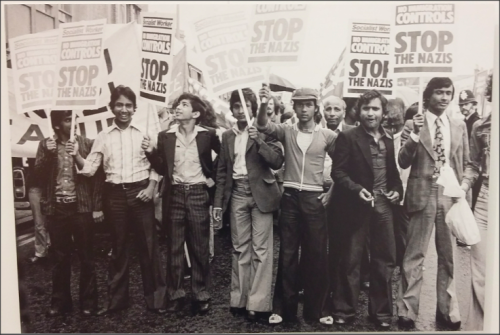 Charting rock music’s rallying call against racism in the 70s and 80s, Rock Against Racism is a photography exhibition with a resounding message. Syd Shelton was the movement’s official photographer and this is his first major exhibition in a career spanning 45 years. It is certainly worth the wait as it captures the social and political unrest of the times as Britain struggled to come to terms with an influx of immigrants from the West Indies, Africa, India, Pakistan and Bangladesh. Racial flashpoints and the rise of the National Front are covered powerfully with much fist shaking and even the odd Nazi salute but also the coming together of the nation’s creative community to fight this intolerance.

The explosion of music scenes as starkly different as punk and Jamaican ska during this period highlights the mixed cultural signals of the times. None of these divisions mattered much on stage as bands such as The Specials and The Clash sent out a unified message.

The photos also show Tom Robinson, Misty in Roots and The Au Pairs among the headline acts. However, a disturbing sign of the times was that punk band Sham 69 were forced to pull out after receiving death threats but lead singer Jimmy Pursey turned up in their place to address the crowd. This photo has a particularly timeless, iconic feel despite the band’s no show – perhaps because of the crowd’s undaunted spirit and how that energy is translated in the moment. And it really is a sea of faces.

The East End of London features heavily. The concert was held there in Victoria Park, Bow but there are also unrelated shots of Tower Hamlets in the 1970s with long haired, white youngsters, seemingly unaware of the concert, up to mischief in East End backstreets and other images of East End skinheads labelled ‘Anti-Nazi’ but looking menacing anyway. (looks aren’t everything and guess we all have to learn not to judge on face value alone.)

Again, in Hackney a group of black men and women brandish part of a destroyed National Front banner as if it is a war trophy but their smiles are joyous and vindicating rather than vindictive. Shelton uses these photos of Anti-Nazi demonstrations and National Front marches to give a background to the emergence of the concert.

Black and white photos of banner waving Bangladeshis marching through Tower Hamlets show a social movement championed by the Socialist Workers Party. It is their slogans of ‘Stop The Nazis’ and ‘No Immigration Controls’ that are being waved and, indeed, during such periods of unrest political sentiment tends to swing either Far Left or Far Right. However, the emergence of the Rock Against Racism movement 1976-1981 channelled this discontent into a loud, unified voice using a slogan of their own – ‘Love Music, Hate Racism.’

Entry to the exhibition is free and runs from  October 2 to  December 5 2015 at Rivington Place.