Rites of Passage: Between Light and Shadow (Exhibition) 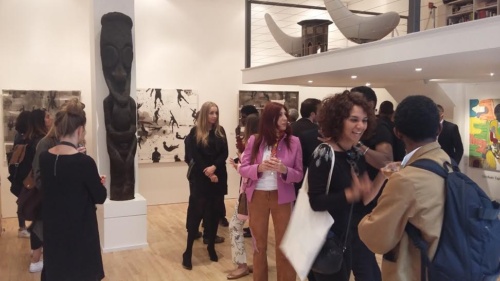 Review of: Rites of Passage: Between Light and Shadow (Exhibition)

Any exhibition coordinated to take place in the UK and The African continent simultaneously is certainly probing cross-cultural dialogue in some manner. This group show featuring shining lights from the world of painting, photography and sculpture will invite your engagement in such – both in London and Cape Town. The binding theme here is ‘transition’ which can be widely read as anything from the growing pains of adolescence to more subtler milestones of self-awareness.

There are also less identifiable markers which flit between models. The bronze sculpture series ‘Legacies of Liberation’ by South African artist Neil Wright is in this bracket. They remind one of noble, austere monuments to political or cultural life but are presented as playful. One such sculpture has Mickey Mouse ears and carries a child but you suspect this image is, if not a comment on Western consumerism in Africa, then pertains to memories about childhood and the mother figure. But is there an inference of burden, cultural or otherwise, in this liberation?

Photographer Othello DeSouza-Hartley lies in a foetal position on the floor of an abandoned building in one of his pieces. Inspired by painters such as Caravaggio his work is influenced by the form and light in the work of the Dutch masters. The dark themes here along with the noir feel of gritty cinema emerge in his photo series but particularly here where the set is lit only by a fluorescent light directly overhead, bathing the subject in a minimalist glow which can almost pass for moonlight.

Guinea Bissau-born artist Nu Barreto has been based in France for 17 years but his creative journey now brings him to London as a stand-out participant at this group exhibition. The figurative gestures in his work could easily be compared to British artist Lowry’s depictions of Manchester where he used stark, stooping representations of human beings as a form of cultural story-telling. But while Lowry’s Matchstick Men have a heavy-footedness about them that bind them to the grey, chore of existence Barreto’s figures find no ‘terra firma’ and float about on the canvas like pollen. Not solely a comment on the rootlessness of diaspora but also its affects on a community of born and bred locals. Here it’s the relationship between black and white people but perhaps also a very timely comment about a world struggling with the migration crisis and the Brexit immigration backlash.

The Rites of Passage: Between Light and Shadow exhibition is on at Sulger-Buel Lovell gallery, Unit 2 La Gare, 51 Surrey Row, London SE1 0BZ until August 7th.