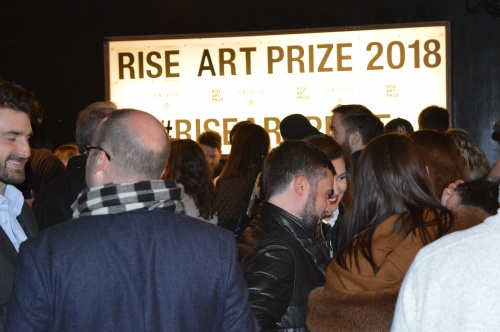 THE RISE ART PRIZE at House of Vans, Waterloo yesterday evening drew together an impressive line up of judges, Gavin Turk and Fiona Banner among them, to do justice to the equally impressive 26 shortlisted artists competing for the £10,000 prize. This international crop of painters, photographers and sculptors survived the cull of the 2,300 submissions from a whopping 16,000 artists, so quality was never a real issue at this stage. Originality and aesthetic elements alone would separate the great from the good.

Tom Waugh’s hyperrealist sculpture of an empty box of discarded polystyrene had guests doing a double take. There were one or two mutters about it being typical throwaway sculpture in the tradition of Marcel Duchamp’s Readymade Art, which made its mark in the early 1900s, but on discovering that it wasn’t a real paper box but an actual marble and stone sculpture, the blood drained from a couple of faces. Closer inspection would have you shaking your head in awe. The exactness and craftsmanship coupled with his clever creative insights and examinations certainly won over the shortlisting panel.

Dutch photographer Jenny Boot opened up to What’s Hot London magazine about her own journey to Rise Art Prize selection. Despite racial differences, she bonded with the black model in her entry ‘Queen B’ about women’s status in the world and particularly the underlying theme of the work – anyone can become a queen. However, the photography prize went to Gina Soden whose Renaissance-inflected Klinik was not exactly the Sistine Chapel ceiling, more the ceiling, walls and other interior features of an abandoned building as seen through a circular window; the photographer’s aesthetic gaze selective of powerful architectural features and vignetting out others using this tunnel vision.  You’ll notice the emphasised perspective points, particularly the vanishing point on the ceiling finds post-modern parallels with the geometry and mathematics of the Renaissance art of the mid-1400s. Even the accentuated orange and blue hues have the look of the Mannerist Art that thrived in the High Renaissance after the era of Michaelangelo and Raphael.

It was a busy night for Gina Soden, who also won the overall prize, awarded by former YBA Young British Artist) Gavin Turk, wearing a pink beret that certainly stood out in a crowd. Other memorable winners were South African artist Nelson Makamo whose intriguing drawing of a young black male wearing red-rimmed glasses and bearing a ponderous expression, meant one or two journalists’s microphones and video cameras were soon heading his way.

Although much in demand following his win, he spoke to What’s Hot London in depth about his creative drives with impressions of his home city of Johannesburg evident in the work. (check out What’s Hot London’s video interview in the next few days). The drawing category also brought out the best in the younger artists with 11-year-old Serenna Chenery Copsey crowned Young Artist of the Year for her cleverly worked portrait of her younger brother, composed in part of the numbers and letters loved by her autistic sibling.