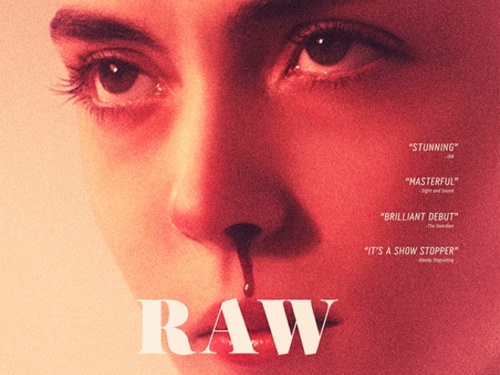 Never mind the subtitles, this French-Belgian horror-thriller has given the Anglo-American dominance of the genre a welcome shot in the arm. Starring Garance Marillier as Justine a coming of age veterinary student from a strict vegetarian family, the meat issue is never far from the surface and you soon come to realise meat is definitely murder, but not quite in the way you expect.

This is no ordinary veterinary school, hidden away in rural France and with stomach wrenching initiation rites that would test an army cadet and drug-fuelled parties that are more E than erudite. It’s a miracle any of her wild, reckless college mates find time to study with a rave never more than a weekend away and senior students (Elders) surprising them with constant stunts which test their principles and will.

It is one such raw rabbit kidney eating initiation which has Justine agonising over her biggest principle – that of the committed, stringent vegetarian. The decision she takes triggers a very unusual eating disorder that has her compulsively eating meat and even stealing burgers from the college cafeteria to feed her addiction. The vacant zombie-like look in her eyes is a hint of the horrifying escalation that is to follow. Cannibalism is bad enough, but eating your big sister’s finger?

The wailing church-organ film score during those gory crescendos has a touch of the 1970s, but otherwise, this film is refreshingly unattached to any era or cliches of the genre. The protagonist and antagonist, sixteen-year-old Justine and her sister Alexia (Ella Rumpf) respectively, are three-dimensional character studies rather than cartoon cut-outs. There’s the big sis-little sis love and hugs as well as the sibling squabbles but also a noticeable element of unhinged depth in both, which has you trying to work out whether they are good guy types well before the blood-letting starts. It’s never that obvious.

The accepted notion of the movie heroine is truly frazzled in this movie where the pale, gawky slightly off-key Justine seems unhinged enough to eat everyone in sight and her sister is just as schizophrenic. Alexia always has the nod in that respect: there’s a touch of the sadist about her in all things. Wait till you see the scene where she tries to give her little sis a home-made Brazillian wax.

Writer-director Julia Ducournau is a cerebral, dark, provocative talent who throws the unexpected at you with the expressionistic willfulness of a veterinary student armed with a bucket of yellow paint in one hand and blue in the other. And that actually happens in the movie. The yellow paint lands on Justine, the blue on a male student and one of the Elders shacks them up in a bedroom together and says “Don’t come back until you’re both green!” There are countless similar examples of this colour-outraged yet stark, dark movie which sets it apart from the rest. Critical acclaim a definite, commercial success a distinct possibility.