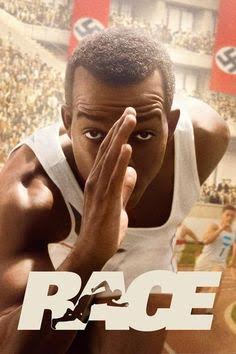 US-born black Olympic athlete Jesse Owens won his four gold medals under the oppressive atmosphere of the 1936 Berlin Olympics in Nazi Germany. And if that was not enough of a feat he did so facing enormous pressures back home in the US where racial issues had reached such a crisis point that the National Association for the Advancement of Colored People (NAACP) urged him to boycott The Games. Owens chose to protest against the Nazi’s twisted ideology on racial superiority by winning all the medals on the world’s biggest sporting stage. This achievement and the inspiring life journey leading to its accomplishment is superbly captured by director Stephen Hopkins.

Actor Stephen James portrays the athlete caught between his increasing popularity as a track star at Ohio State University smashing records yet still facing racial taunts at this same university. His steely mentor/coach Larry Snyder played by Jason Sudeikis steers the star in the right direction in the face of such put-downs. Owens comes across as both humble and conscientious as he bears his celebrity status and the hatred of his skin colour both at home and in Nazi Germany. One fears the reality was much more venomous particularly in the cauldron of the Olympic stadium but the film plays out as milder than expected with fewer outright confrontations  – even when he was in Berlin.

Perhaps this can be seen as a way of ushering the audience towards his phenomenal achievements so that they serve as a moral tale. The focus here drawing the venom from the hostile backdrop and reassuring everyone that talent conquers all. Indeed, he closed a lot of mouths and opened a lot of closed minds by winning those four golds. But a fuller account would have shown a little more of that venom so that those of us who were never there could more accurately set the scene historically and politically.

However, those same qualities give the movie a clear, purposeful rhythm with clearly defined progression points. Yes, it’s a warmer film than expected despite the turbulent world affairs but the director has sought to make Jesse Owens a human being in a turbulent world not a turbulent world with a remarkable athlete emerging as an afterthought. All things considered it is a very educational piece but avoids that emotional underscore for better or worse.

His treatment doesn’t improve much after the glory. In 1966 when he had long since retired a grand dinner was thrown in his honour in Rome and there’s a sour point when he is told that despite this occasion being for him he still has to enter through the workers’ entrance round back. To many that would show the insanity of race hate. Another thing that did this were the closing credits which stated that fellow Olympian Carl ‘Luz’ Long died in Sicily fighting for the Nazis. Long had publicly defied Hitler by embracing this ‘rival’ athlete and supposed racial enemy on the track after Owens beat him in the long jump finals. The two remained friends after The Games. An age then of conflicting racial relations where the individual was often at the whim of greater players on the world stage and where fiery orators such as Hitler sought to fan those flames. Jesse Owens proved that sometimes actions speak louder than words.