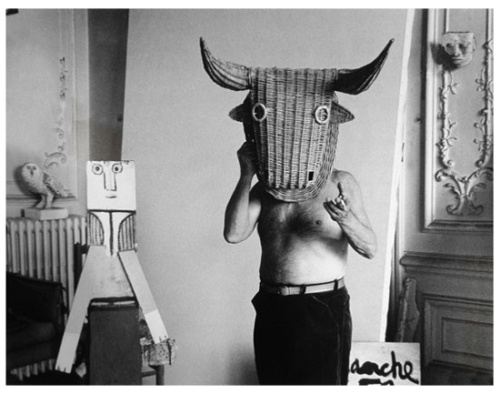 The Gagosian Gallery presents a Picasso fascinated with his Spanish bullfighting heritage and featuring works from childhood dated as early as 1889 and up until his death in 1971. It’s easy to associate the complex, strong-spirited artist with this dramatic and gory spectacle. Born in Malaga in 1881, his childhood memories are steeped in the culture of the bull and matador. It also represents both his creative and sexual evolution; the Minotaur myth not a million miles from the tale of one who would grow up to be counted among the most celebrated of artists.

Curated by his close friend British art historian and Picasso biographer Sir John Patrick Richardson and with Picasso’s grandson Bernard Ruiz-Picasso working in partnership with the Gagosian it is an intimate, carefully selected exhibition which protects the Picasso brand. You’ll discover his studies of the violence and glamour of the matador-bull relationship border on obsessional with paintings, sculptures and pottery covering many areas including mythology.

Once you enter the front gallery best you bare left to catch references to Picasso’s childhood and make sense of what truly drove this creative output. Here a black and white film projection shows him as a child dressed in his toreador outfit and playing bullfighting games with his nanny who seems willing enough to wriggle fingers on her head and play the horned, hoof scraping sacrifice.

In this same room there’s a painting ‘Portrait de Paul en Torero’ (1925) of a child dressed up as a toreador which certainly brings to mind the young Picasso in this film. The soft, light, pastel, colours contrast the jarring palettes of the paintings either side – Le Matador (1970) and Torero (1970). These later paintings are the more typically modernist Picasso we’ve come to know. The disembodied eyes and non-representational limbs and digits now trademarks for a man who was so experimental he sought no such trademarks and actively fought them all his life. Positioning this contrast of styles together makes this pretty evident.

There are numerous sketch studies of matador and bull scenes with each stage a self-contained canvas highlighting his approach to figurative and abstract elements. Similarly, there are paintings of the same bull subject matter; first in a representational style and then through a cubist’s eye. Picasso once claimed that if an artist knew all the rules he was free to deconstruct the established grammar as he saw fit and does just that.

The Frise de Taureaux glazed ceramic plate he completed in 1959 has a distinct mythological feel in its design and both this and its antiquated look are a testament to a creativity that seemingly drew from the infinite. You’ll also find his representations of bull heads are typically varied with one fashioned from a bicycle seat and handle bars positioned so high on the gallery wall you almost miss it.

Others in his Tete de Taureau series of bull head sculptures are thankfully displayed at eye level. These are perhaps more conventional sculptures if such exist in the Picasso portfolio. Nonetheless, charged with that inimitable violent Picasso energy and stamped with his fiery Mediterranean psyche.