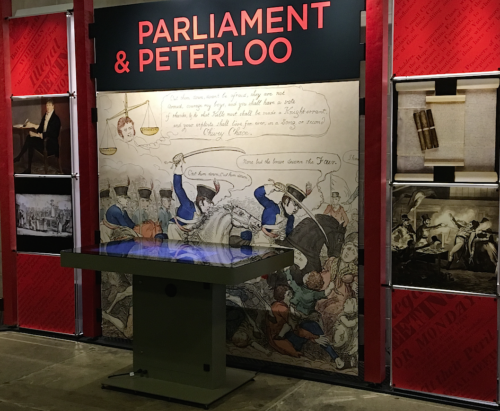 Review of: Parliament and Peterloo (Exhibition)

A summer exhibition in Westminster Hall, Houses of Parliament covers the events of the Peterloo Massacre, 16 August 1819 when a cavalry charge into a crowd of Manchester protestors led to 18 deaths and around 500 injured. The display boards detail the unfolding political and social turmoil in calendar order, starting with the end of the 22-year Napoleonic Wars in 1815, which left many soldiers destitute, injured and disillusioned.

Best bring your reading glasses because there’s a lot of info to take in about the aftermath of the Battle of Waterloo and how it bled into the UK unrest. But here’s a breakdown: Napoleon was defeated in 1815 but Britain accumulated huge debts to secure victory, the nation’s economy had basically run on decades of military demand, with the Midlands and the North working hard to meet these needs. When this dried up after peace was declared, the economy suffered, unemployment in these regions soared and 300,000 soldiers were seeking jobs which weren’t there or struggling with life-changing injuries. 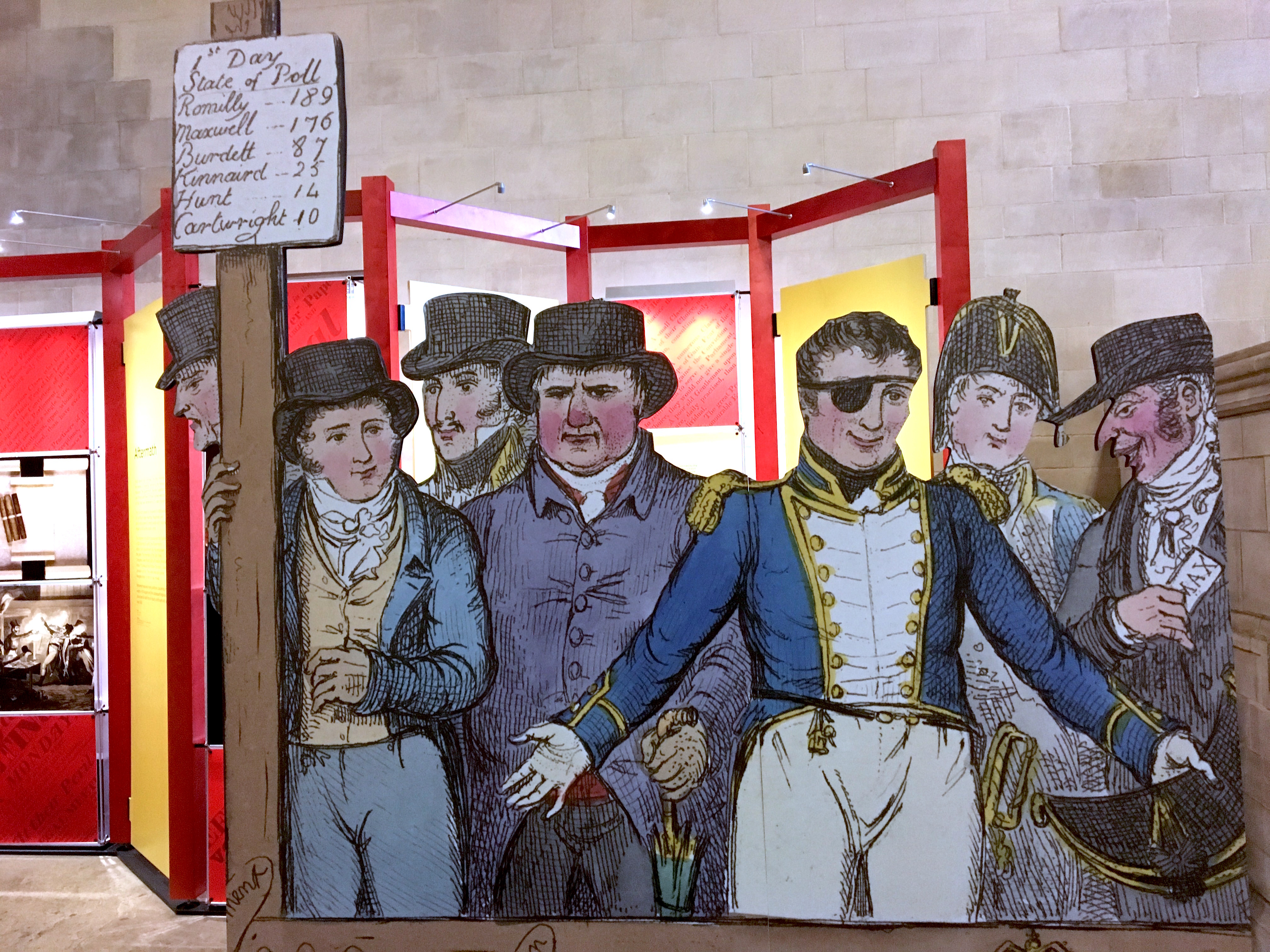 It’s plain to see from the tone of the exhibition and the historic details provided that the nobility and landowning classes were the government’s main concerns. You are shown how the Corn Laws introduced in 1815 were there to safeguard the livelihoods of these rich farmers by taxing cheaper grain imports. Bread prices increased nationwide because of PM Lord Liverpool’s Corn Laws and weren’t helped when the eruption of Mount Tambora, Indonesia proved formidable enough to spread a dust cloud which triggered global crop damage. We are informed that the already needy Brits now began to starve and unrest began to spread.

Bear in mind, the government was fearful of French revolutionary ideas spreading to the UK during the Napoleonic Wars and had already started to clamp down on dissent and public meetings. The display boards highlight how the confluence of political and social change injects history-making potency into such events.

Happening around the same time, the 1811-1816 Luddite Rebellion was, at first glance, merely a protest against industrialisation and capitalism but was actually sparked into life by the lack of food and jobs after the Battle of Waterloo. This Luddite Rebellion which began with rioters smashing machinery in Nottingham before spreading nationwide, is highlighted as one of the events leading to the Peterloo Massacre.

You’ll find both dignified portraits and slightly lampooning caricatures of all the main figures. The rather noble looking Henry Hunt is painted in his finest clothes sat at a reading table with newspapers, quill and writing pad. We are told he was a political radical who went to Manchester in 1819 to stand as an MP in a mock election. This sounds harmless enough until you are made aware that Manchester wasn’t allowed any MPs at that time. 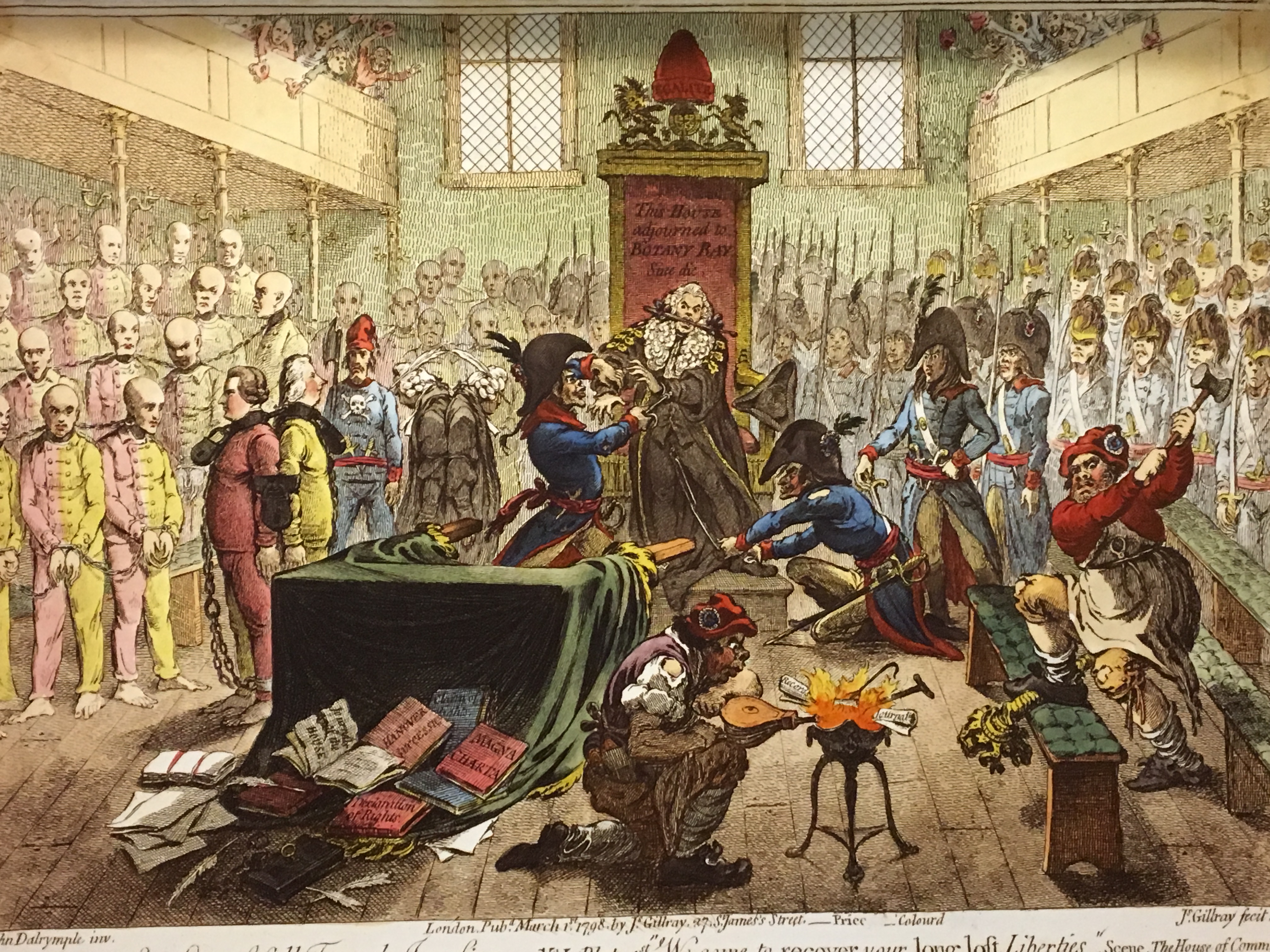 After being banned by Home Secretary Lord Sidmouth, he persisted with another pro-parliamentary rally in St Peter’s Field, Manchester which attracted 60,000 people. The Government, disturbed by the numbers, sent in the 15th Hussars, a British army cavalry unit and demanded Hunt’s arrest. The persistent dissent from the crowds and the over the top reaction of the cavalry resulted in the Peterloo Massacre.

An interactive display unit brings you closer to the actual archive of documents, including the raft of legislative which followed the massacre. Still ill at ease with the Peterloo and Luddite rebels, the government passed six acts, their chief purpose to stamp out British dissent. The Seditious Meetings Act was typical of these and it’s pointed out that amongst those arrested was black Jamaican activist William Davidson, executed for plotting to assassinate the Cabinet. 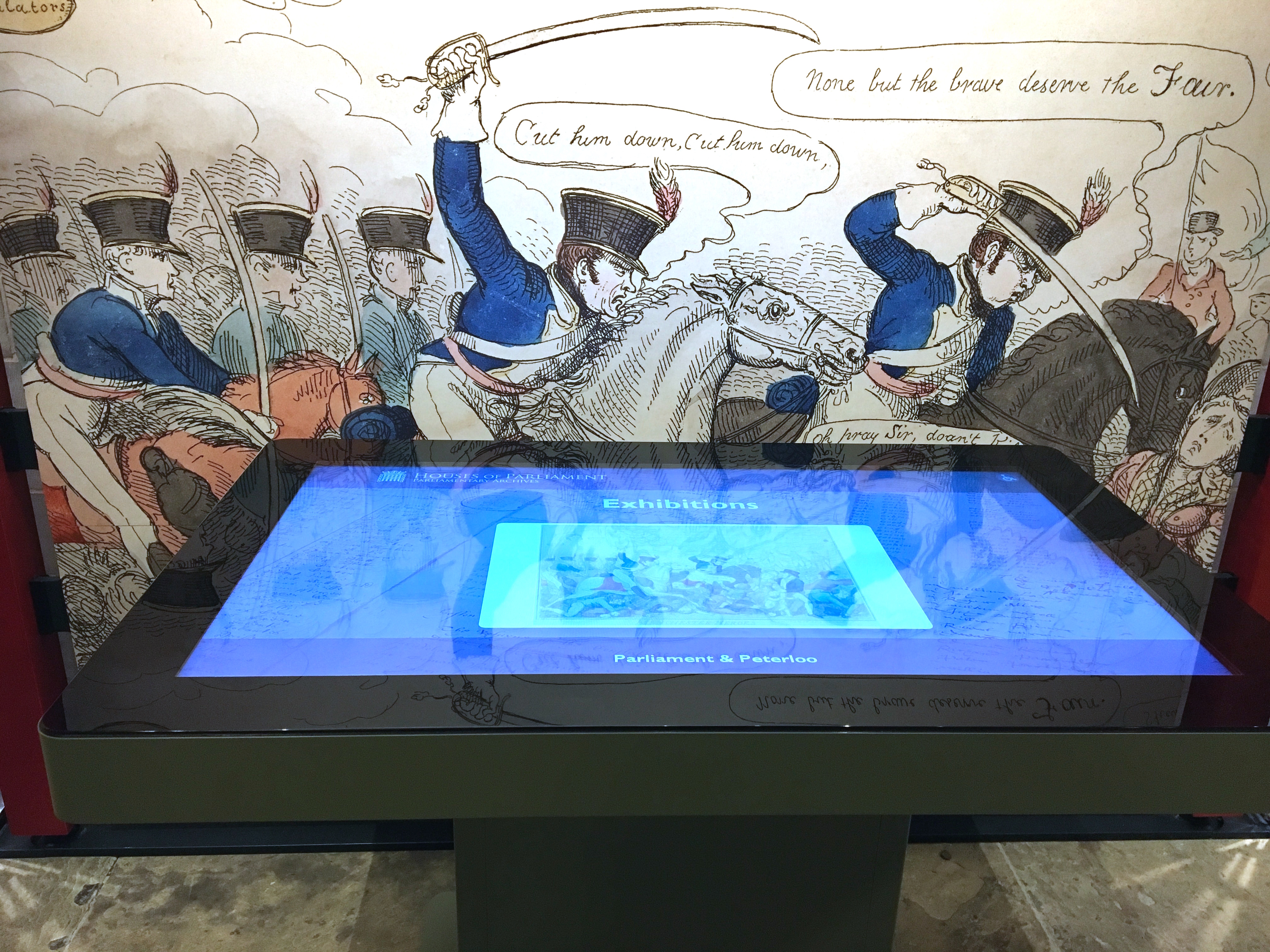 The actual speeches by Lord Sidmouth on February 27, 1817 imposing the Suspension Bill in the House of Lords and the Peterloo Massacre petition by Mary Fildes (15 May 1821) are read out on video by actors from Royal Holloway, University of London. Mary Fildes, President of the Female reform Society, was amongst the speakers at Peterloo and sought an enquiry into the deaths. Through an actor, she relates how she was beaten to the ground by constables and almost faced death when a cavalry swordsman drew arms at her. She was amongst the few lucky enough to be in the position to petition Parliament, which hadn’t yet even extended the right to vote beyond rich shopkeepers.