Home  /  Features  /  In the Studio with Artist Adelaide Damoah

In the Studio with Artist Adelaide Damoah 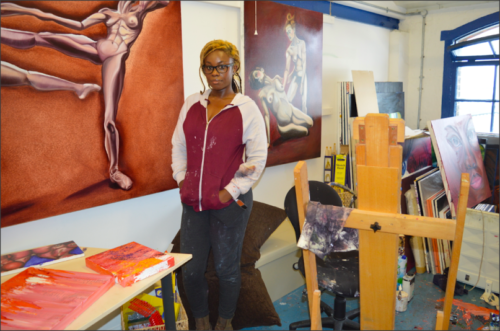 The Studio series of What’s Hot London? visits artists in their working environments to catch a glimpse of their creative processes and atelier inspirations.

An artist in action with paintings in different stages of working progress offers a new perspective on the art which we usually only catch hung and dry in a gallery space. Well, this week it’s painter Adelaide Damoah showing us around her Woolwich studio, an impressive, airy and well lit space, the stored and half completed canvases testament to her ongoing development as a figurative artist. 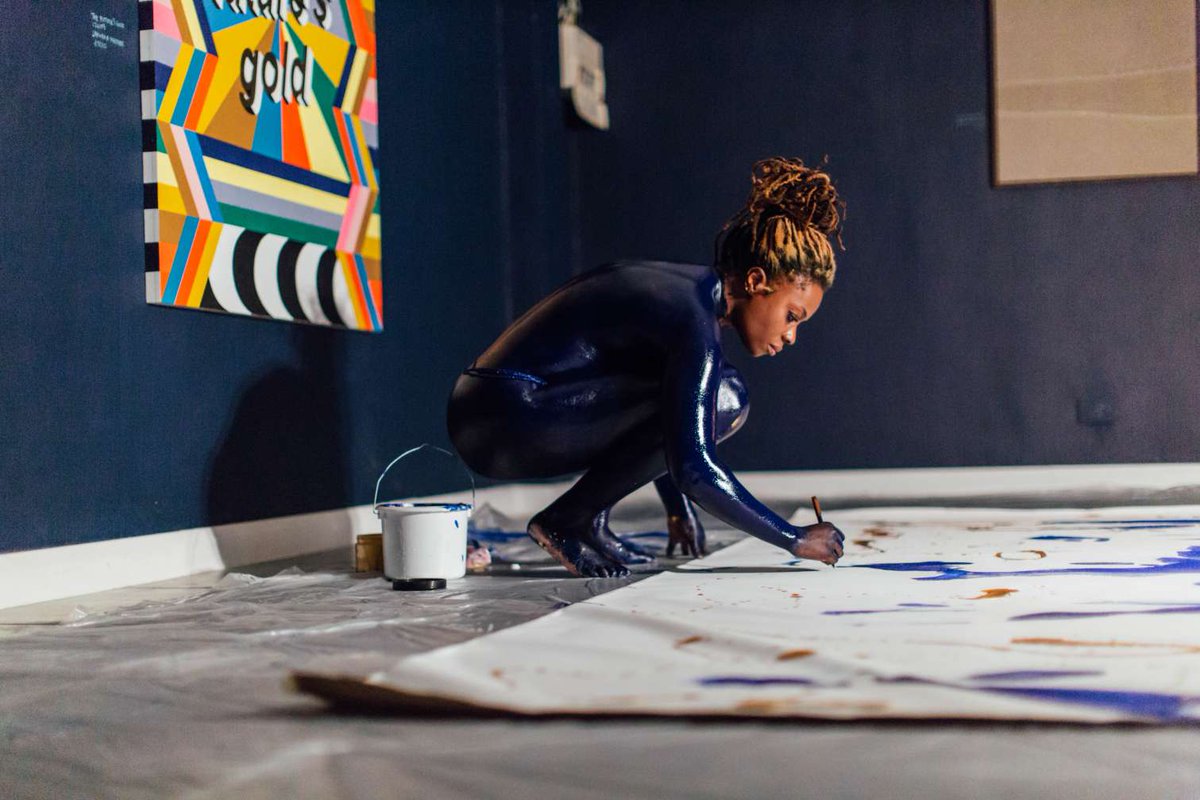 This 39 year old British artist of Ghanian descent moved into the studio two years ago after a successful career in the pharmaceutical industry as a hospital sales specialist ended to make way for her creative vocation. She has been painting since 2005 and in that period has found her place as an intuitive figurative artist but is in no mood to rest on her laurels. Since her last exhibition at Camden Image Gallery in November 2015 she has experimented with a more abstract style which still embraces her love of text-branded human forms. Again, the canvases on her studio floor show her approaches to this. She tells how this change was prompted by a colleague who suggested she attempt a style of art so removed from what she is comfortable with that it challenged her. 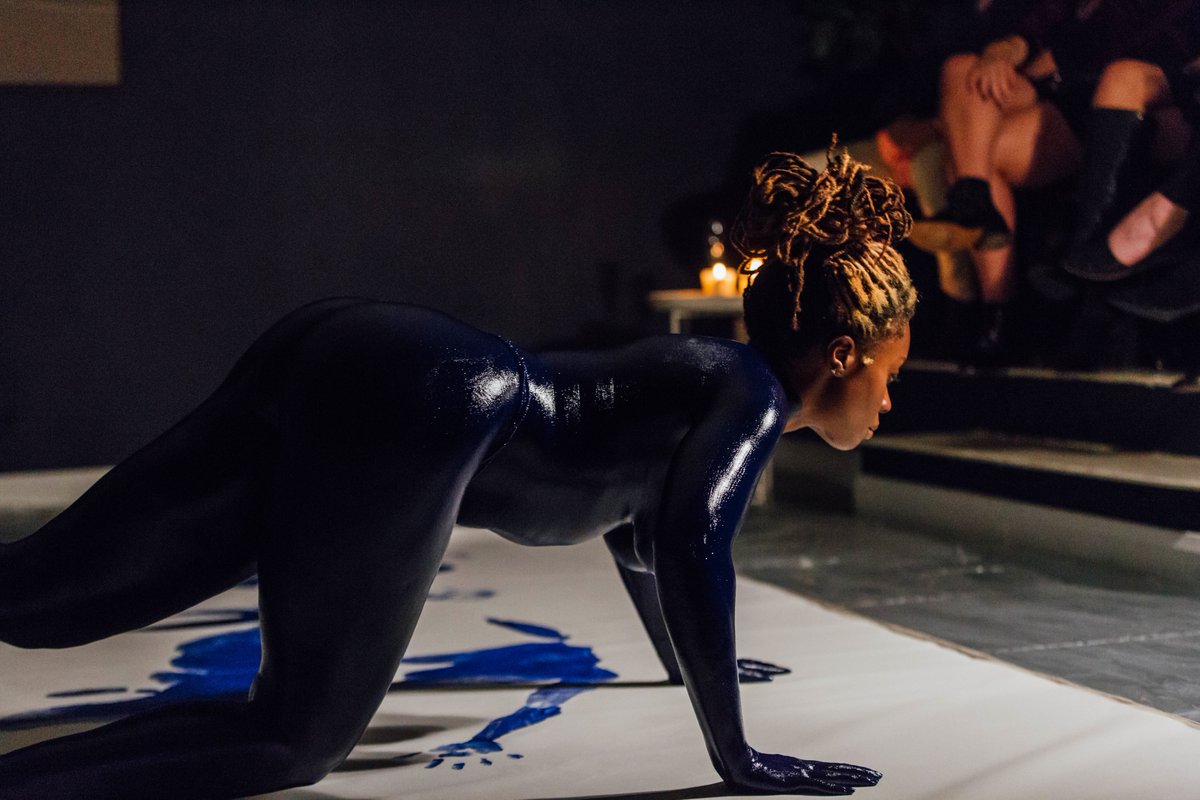 She informs us this has evolved into using her own body as a paintbrush of sorts, covering herself in paint and making impressions on the canvas that are ‘of the figure’ but not classically figurative, while at the same time experimental. Only too aware of the hyper-sexualisation of the black female body, she maintains that this is far removed from what she intends to explore with her work. This portfolio inevitably incorporates both gender and race but she points out it is not the only aspect. The influences of Cuban-American ‘earth-body’ artist Ana Mendieta pretty evident here but also a self-confessed admiration for Jean-Michel Basquiat driving her more expressive channels. 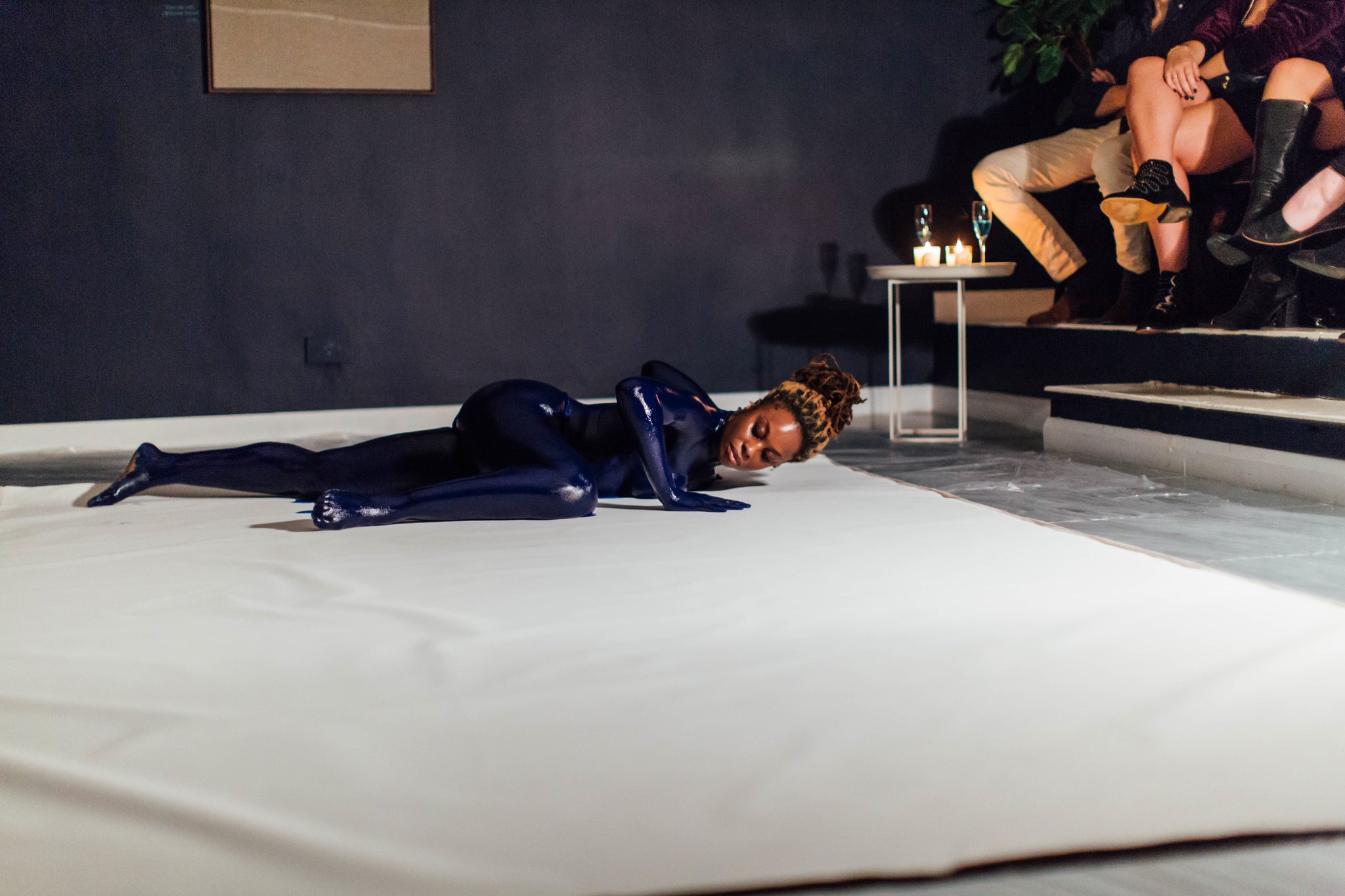 Adelaide Damaoh uses her body as a living paint brush

Among the eye-catching completed pieces on view is the unambiguously titled Broken. Two naked dancing women joined at the wrist like one entity, the arms bleed at the point of fusion. The female form and dance are the gestural study in much of the work displayed on these walls. Some featuring the same set of models, all captured in different dance poses. They set the tone of the studio environment, fashioning it with energy, drama, movement, a combative grace that no doubt sets it stamp on what she later produces on canvas.