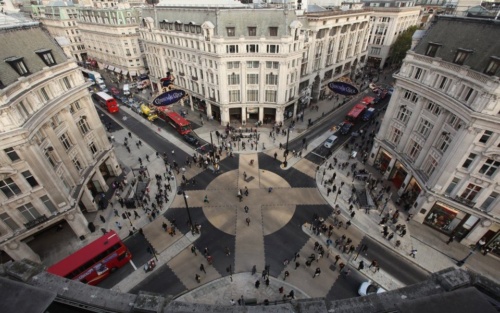 MAYOR OF LONDON Sadiq Khan has recently unveiled plans to pedestrianise the East-West section of Oxford Street in time for the launch of the Elizabethan Line in Dec 2018. He has marked out a half-mile area from Oxford Street to Orchard Street, although the North-South section will remain as it is. Transport for London promises “an unprecedented level of investment in central London” with £60 million earmarked for Oxford Street. The authorities have also looked into increasing the capacities of Tottenham Court Road and Bond Street stations. The new look tree-lined thoroughfare complete with public art is set to be a tourist-magnet. The Mayor’s timely announcement gives a year countdown before the expected influx of tourists.

Although the traffic-free zone targets diesel and petrol vehicles, even cyclists face restricted flow under the current scheme. It is widely recognised that Oxford Street, with half a million visitors everyday, is one of the most popular streets in the world but comparatively few realize it is also one of the most polluted. The soaring levels of nitrogen dioxide (NO2) emitted by buses place it at the top of the name and shame list compiled by scientists and environmentalists.

The EU’s safety limit for this toxic pollutant is 135 micrograms per cubic metre yet scientists from Kings College London detected peak levels of 463. Khan and former mayor Boris Johnson both accepted the findings, with Johnson outlining plans for the world’s first ultra low emission zone (ULEZ) by 2020. Also accidents are a concern. Over a three year period prior to the consultation a pedestrian was involved with a collision with a vehicle every week

Despite the fact cars already have restricted access during peak hours, the main culprits buses and taxis continue to use it. A 40 per cent decrease in buses is expected and Crossrail and the Elizabethan Line will bear the excess passengers no longer using these banned transport options. The public is in favour of a pedstrianised plaza with two thirds of 12,000 voters giving it the thumbs up during public consultation. This includes not just residents but businesses that stood to lose potential custom from the reduced flow of traffic yet still favoured better air quality.