Out of Chaos: Ben Uri 100 Years in London 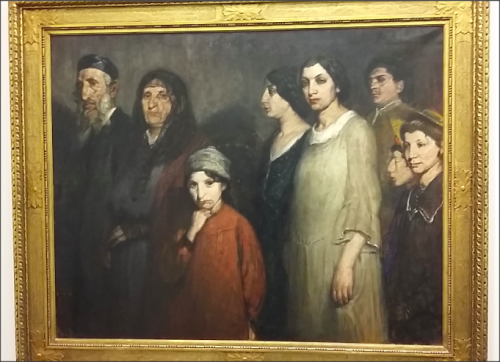 The current global migrant crisis, where predominantly Muslim nationals are fleeing war and poverty draws some parallels with Jewish refugees fleeing persecution at the turn of the century and during World War 11. This exhibition at Somerset House titled Art, Identity and Migration focuses on the work of Jewish immigrants or their descendants with the Ben Uri institution supporting and collecting their work since 1915.

Samuel Hirszenberg was a realist painter whose work centred on themes of exile and migration. The Sabbath Rest (1894) depicts an orthodox Polish-Jewish family gathered before Sabbath. Painted during a period of Russian pogroms against Jews which also affected Poland, it captures the mood and environment of displacement on many levels. Bear in mind Hirszenberg was born in Poland in 1865 and had first-hand experience of attacks on Jews leading up to the Warsaw Pogrom in 1881. This oil on canvas, then, is a diary of how a typical family dealt with the harsh realities of migration. Its alternative title is ‘Letter From Argentina’ and this letter from a relative who has migrated to find work is clearly the reason for the family gathering.

Although not Jewish himself, Belgian artist Victor Hageman was another social realist who specialised in migrants. His 1910 oil on canvas The Emigrants shows the drawn out, emotional toil of forced displacement on three generations of a Jewish family (and Jewish Family was its former title). The sombre and blackened palette is so austere it has the feel of a funeral were it not for the red-dressed child in the foreground, herself pale and thoughtful like the other figures. It was owned by the Speth family who were also figureheads in Jewish migration, owning the Red Star Line ocean passenger which brought many to the USA.

Jews fleeing Eastern Europe at the turn of the century and resettling in the UK sought the East End, in general, and Whitechapel, in particular, as their new home. The area became a magnet for their most talented artists and later paintings express that unique cultural mix of East End socio-economic existence and Jewish customs. The Ben Uri institution, itself, was created there and ideally located to purchase the work of renowned East End artists such as Isaac Rosenberg and Mark Gertler.

For He Had Great Possessions (1932) by Amy J Drucker depicts East End life as experienced by a newly arrived family. This oil on canvas has an unusual lighting effect – subdued, dark and overcast it reminds you of movie cinematography, certainly a film you think you might have seen. This effect must come from the unique device of having gold hues emerging beneath the blurred palette of night. Not quite Nighthawks by Edward Hopper, but with similar painting-movie connotations. It’s a poignant painting to finish on because despite it showing again the pain of being uprooted and starting anew with little possessions in a strange land, it also points out that to the head of the family his family are his possessions. Certainly, his gold beyond the darkness.