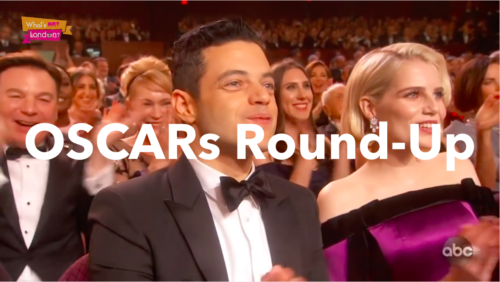 Award season came to an end last night with the 91st Academy Awards in LA. So, in case you missed it, here is a round-up of all the highlights from this year’s Oscars.

We all know that Kevin Hart pulled out of hosting after controversy over some old homophobic tweets. However, it seemed like it was no host, no problem. Instead of an opening monologue, we got a blockbuster medley from Queen and Adam Lambert and we got a whole host of stars to present the awards including Serena Williams, a ‘Wayne’s World’ reunion and a hilarious tribute to ‘The Favourite’. The show ran smoother and there were no awkward gags either. Most importantly though, the show was faster, coming in at 3 hours 15 minutes rather than the 4 hours of last year. It wouldn’t surprise me if organisers decided to go hostess again in coming years.

On to the awards and where better to start than with Olivia Coleman who beat the odds to win Best Actress for her role in’The Favourite’, giving a speech in her signature style. Best Actor went to Rami Malek for his portrayal of Freddie Mercury, continuing the Oscars tradition of awarding best actor to actors playing real-life protagonists.

Alfonso Cuarón took Best Cinematography and Best Director for ‘Roma’ although Netflix will be frustrated that their signature film couldn’t take home the nights biggest award. It was ‘Green Book’ which took Best Picture which surprised many. However, this tale of a black musician and his white driver who learn to get along against the backdrop of 60s southern racism is exactly the kind of film the Academy loves to award. Even if many would have preferred they went for something a little riskier.

Black Panther also won big, being awarded for its Costume Design, Production Design and Original Score. To give you an idea of how big this was, Ruth E Carter and Hannah Beachler are the 2nd and 3rd black women ever to win Oscars for non-acting categories.

Bohemian Rhapsody won awards for Best Sound-Mixing, Sound-Editing and Editing after editors had to piece the film together once Bryan Singer had left the project due to sexual harassment allegations. His name went unmentioned last night, with award winners thanking the members of Queen instead.