One Night in Miami (Theatre) 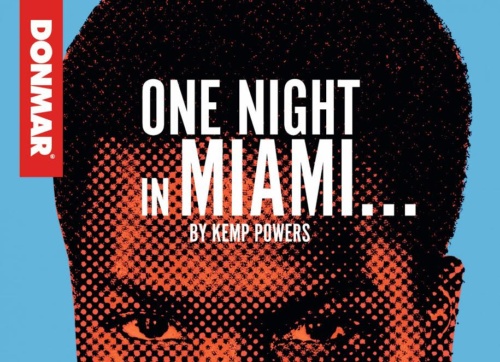 Review of: One Night in Miami (Theatre)

Did this conversation between Cassius Clay (as he was then known), Malcolm X, soul singer Sam Cooke and American footballer Jim Brown actually take place? That’s debatable, but without doubt these three men were close pals of The Greatest and if we are led to believe they were together chatting in this hotel room after his world title win then who are we to argue? It makes a conveniently minimalist setting for their expressions of camaraderie and later the claustrophobic tension as they argue about civil rights and racial politics.

Director Kwame Kwei-Armah made his name as only the 2nd Black Briton to have a play in the West End, with Elmina’s Kitchen. His unique approach to the direction of Sope Dirisu as Clay, indicates that his trialblazing will continue purposefully.

The play opens with a projection on a wall above the set showing Clay on the verge of victory against the fearsome Sonny Liston, the ringside commentators already announcing that the once unbeatable Liston is refusing to leave his stool for the 7th round. A jubilant Clay then begins to tell the world how pretty and great he is.

However, the Clay that takes the stage a little later has all of his mouth but curiously a lot of less of his unshakeable authority. His love of taking centre stage dissipates somewhat in the presence of his high profile pals even though he is the centre of attention having recently been crowned world champion. Theatre would have been a perfect alternative career for the big stage-loving Muhammad Ali we all know and therein lies the refreshing irony of this performance.  Clay’s hesitancy is possibly a deliberate approach designed to give him a more measured, multi-dimensional side, one he perhaps only reveals behind closed doors away from the cameras – or even in the company of those he truly regards as his equals or is even secretly in awe of.

His noticeable switch is to be expected when the charismatic Malcolm X is in full flow. Actor Francois Battiste portrays him as self assured, well presented and honourably conservative in both gesture and speech. You’ll notice him slightly distancing himself from the alcohol swigging and girl-loving shenanigans of the more pally Clay, Cooke and Brown. Also the Nation of Islam spokesperson is presented as a complete human being rather than the cardboard cut-out antagonist that the media portrays him as. Committed to his ideals, he still has a twinkle in his eye when dropping a politically relevant comment rather than resorting to drumming his opinions home. That is, when he is not locking horns with Sam Cooke.

Soul singer Cooke’s pandering to a white audience and reluctance to take on the Black Power mantle is a growing area of contention between the two. Actor/singer Arinze Kene, who plays Cooke, is an astonishing talent, his pivotal performances often driving the points of conflicts into crucial areas, taking them to searing points of tension. And he does all this while revealing the voice of a songbird, delivering some of Cooke’s hits when called upon, with a spine-tingling beauty that had the audience breaking out in spontaneous rounds of applause.

American footballer Jim Brown is angrier and more militant than you’d probably recognise him as, but then again these are the thoughts he shares only with close friends. David Ayala gives him both unshakeable physical dominance (Brown actually bursts into press ups right there on the stage for no apparent reason) also his characterisation gives his disaffection in both career and society a believable source, rising as it does from the polarising racial politics of the day and his efforts to reconcile Brown the adored athlete and Brown the black man in 1960s America.

The opening week of One Night in Miami is perfectly timed with October’s Black History Month because here is a moment in African-American sporting and racial history examined with microscopic intensity, no subject is left half-baked. Friendship means little when such issues are confronted and two of the pals even come to blows over it. Catch this play at the Donmar Warehouse, Covent Garden to find out who.