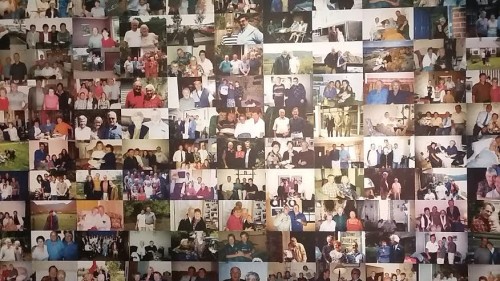 Review of: On Their Own: Britain's Child Migrants (Exhibition)

Child migration in Britain began to gain momentum around the turn of the century when grinding poverty amongst the Victorian working classes meant they had two choices, send their children to the workhouse or if they were too young to work, to families abroad where they had a chance of survival. As you enter the museum a displayed extract from a Charles Booth survey notebook (1889-90) reminds us of these stark choices – a woman from Stepney, East London had to put all her children in the workhouse when her husband died and conditions for her children became unmanageable. Bethnal Green’s Museum of Childhood recounts all of these experiences, from the countless black and white photos of children playing around on ships’ decks set for their new homes to the broader exhibits that give a more complete account of what awaited them.

Strangely enough, the Victorian era 1850-70 was in one way Britain’s golden age where prosperity reached a peak unmatched anywhere in the world, but on the other hand poverty-based child migration began to occur. The Victorian era would come to be identified by the terms, empire and power but also austerity and poverty (particularly in London’s East End). There are many exhibited original letters from child migrants sharing their experiences. Some of the accounts are truly heartbreaking. Visitors are invited to use an interactive telephone to dial into ‘The Pain of Separation.’ from Narrative of Facts 1875 and hear firsthand from William Quarrier’s Emigrants Homes Report parents’ experiences of the loss of their young ones.

Exhibits inform us that the movement took hold in 1869 when charities and churches spearheaded humanitarian campaigns in workhouses and children’s homes but by 1922 the Empire Settlement Act led to the organisation of all agencies, including the leading Church of England Council for Empire Settlement, under an umbrella movement. We are reminded by the many official documents that most of the child migration schemes were run by churches or faith-based charities. The salvation ethos was strong and it was seen as a mission of sorts to relieve these children of their suffering and give them opportunities that would help their spiritual development.

Work was an essential part of this spiritual rehabilitation so they were placed in working environments in Canada, Australia and the USA where even though they lived in family households they were part paid for their labour.

The exhibition provides a rude awakening when you realise that children aged as young as four were relocated to Australia when they were too young to work in Britain but supervising their working conditions abroad would be difficult. 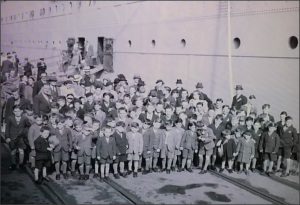 Certainly some of the children in the large black and white photos brandishing shovels for a day’s toil look no older than seven years old, maybe younger. 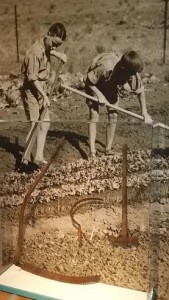 These youngsters were regarded as cheap labour hence their popularity, indeed, the UK government’s attempts to curb this abuse in the 1940s was thwarted because they did not want to upset the Australian government who benefited the most.

It’s shocking to find research items which show child migration was never banned by legislative means, it just evaporated during the 70s when children’s homes refused to send them abroad anymore. By this time over 100,000 children had already been resettled in North America and the Commonwealth some never to see their real parents
or their homeland again. Even more shocking was in many cases they weren’t even aware they had living biological parents because they had been lied to by officials who told them they were orphans.

Concluding the exhibition is the 2010 re-run of a Parliament programme with Prime Minister Gordon Brown apologising for their treatment and proposing a Family Restoration Fund with the Child Migrant Trust which reunited 800 migrants with their families. These migrants have the trust,led by Nottingham social worker Margaret Humphreys, to thank for campaigning on their behalf since he 1980s. (Look out for the huge postcard collage of these reunited families).