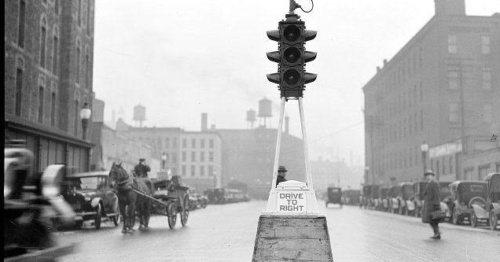 The first electric traffic lights to be introduced in Britain were erected in London on this date August 3rd in 1926 whilst August 5th is the centenary of the first such lights anywhere in the world. We take for granted these safety signallers and their red, green and amber  commands but with our capital city now boasting traffic levels exceeding many European cities and also holding its own amongst the world’s highest traffic polluters then we owe the inventor some sort of centenary fanfare for his foresight.

It was in 1868 that railway signalling engineer J.P Knight installed the first trial device outside the Houses of Parliament to control the steadily increasing horse-drawn traffic. The problem was that his invention operated by gas and soon exploded with enough force to kill a patrolling policeman. So back to the drawing board unfortunately. The Americans then began to lead the way in traffic technology as Britain shied away from this apparently dangerous device. A working model was up and running in Cleveland by 1914 and took over a decade for the UK to catch up. It was a Utah police officer called Lester Wire who invented it – no doubt wary of the hazards it had already presented to his profession.

There is some disagreement as to who can legitimately lay claim to this invention because there was a frenzy of similar patents during this period. African-American Garrett Augustus Morgan was one of the first granted such a patent so that throws a little more confusion into the mix. But what we are sure of is that in 1926 A British version was safely operating in Piccadilly Circus although again manually operated by very worried looking police officers. And yes you guessed it, gas explosions were still destroying these devices up until 1932. Even the non-manual vehicle activated ones! That didn’t seem to put the inventors off because as of this date August 3rd 2016 there are 25,000 traffic lights throughout the UK.