Oct 27: Birthdate of Dylan Thomas, the Welsh Poet in London 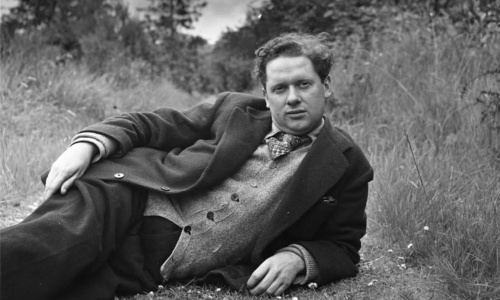 “Swansea’s bohemians in exile were going to ring the bells of London and paint it like a tart”. This quote was attributed to Dylan Thomas after getting his first permanent London flat with a pal. And he remained true to his word. Although born in Swansea, Wales he first visited London in 1933 and would reside both there and in his home country on and off for twenty years of his life. His first stop was Harrow where he lived with another childhood friend while he tried to kickstart his career in the capital. He also stayed on a houseboat owned by his sister and by some accounts actually fell into the Thames on an inebriated night out in the West End.

He was fond of the London pub scene and many of those he frequented later became famous landmarks because he used to drink there. It’s claimed he left his only copy of the script for radio drama Under Milk Wood in the French House pub on Dean Street during one heavy drinking night. The Fitzroy Tavern on 16 Charlotte Street, Fitzrovia was another of his favourites.

It wasn’t until 1934 that he obtained a fixed London address which proved useful as a base for furthering his career as well as being geographically closer to his first London girlfriend Pamela Hansford Johnson.  He shared this Fulham flat with fellow Welshman artist Alfed Janes. It was also in this year that his first book 18 Poems was published, drawing praise from the London literati including T.S. Elliot.

By 1936 he had met his future wife Caitlan MacNamara in the Fitzroy Tavern, one of the Fitzrovia establishments preferred by the areas arty set including Caitlan’s then boyfriend Welsh artist Augustus John, who was up until then still in an on-off relationship with her. She and Thomas moved just across the way to Chelsea when wed. They also returned to Wales, later took up in Oxford and also briefly Ireland and Italy.

His earliest employment in the capital included writing war documentary scripts for Strand Films but his literary career and high society following would prove fortuitous by 1951 when patron Margaret Taylor presented him with a three bedroom Camden flat which would be the couple’s last home. By then he had become Wales’ best known poet.

Although resident in London his love of his home town was undying and may well have been remarked upon in his one of his most well known works Under Milk Wood: “I know there are Towns lovelier than ours, And fairer hills and loftier far…But let me choose and oh! I should Love all my life and longer To stroll among our trees and stray In Goosegog Lane, on Donkey Down, And hear the Dewi sing all day, And never, never leave the town.”