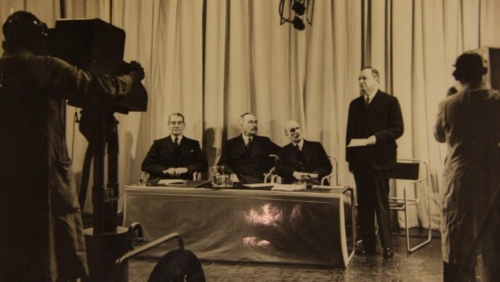 Television Comes to London was the title of a documentary aired on the world’s first television service introduced by the pioneering British Broadcasting Company (BBC) on this day Nov 2nd in 1936. A more apt title might have been BBC Brings a Television Service to the World but no matter how ground-breaking this all was its own Director General John Reith was not too impressed at the time. He openly admitted he was not a fan of TV and even as it grew in popularity across the globe he claimed he never watched it. On launch day he wrote in his diary “I have declined to be televised or take part.” However, nothing could stop the spread of this remarkable new technology or the historic opening ceremony introducing the scheduled programming of the day – which included this documentary about the launch of TV in the capital. Not even Leith, who resigned two years later.

How things had changed! Ten years back few people seemed interested in Scotsman John Logie Baird’s quaint little invention called the Televisor. His meticulously arranged demonstration of his new product in 1926 might have proved he was on sound scientific footing but the amount per set he was charging was close to ￡15,000 in today’s money and there was no rush of takers. But he would have the last laugh in 1936 when the world’s first TV service would open with compere Leslie Mitchell addressing viewers with “Good afternoon, ladies and gentlemen. It is with great pleasure that I introduce you to the magic of television…”.

In much the same way that Betamax wrestled with Sony for the video player/cassette market Logie Baird’s broadcast system at first faced competition with the EMI-Marconi one. The Beeb plumped for Baird at first but later switched to his rival. The roller-coaster speed of such technological development during this battle period was intriguing. Baird’s first mechanical system produced TV images with 30 lines of resolution. He then managed 240 lines but EMI-Marconi trumped him with 405 lines. Bear in mind until recently standard definition was 605 lines until HD TV destroyed that with 1080 line picture resolution. Baird may have been squashed in this race but no one remembers EMI-Marconi, they only remember the man that got there first – Logie Baird and the Baird system that was used in the Beeb’s first programme service. So Betamax he wasn’t!

When you consider an estimated 530 million people tuned in to watch Neil Armstrong walk on the moon in 1969 and the Beeb itself pulled in 30 million viewers to watch Den ditch Angie in an episode of EastEnders (Dec 1986), it’s amazing to think that only 100 viewers tuned in for the world’s first ever TV broadcast. Then again, probably only 100 people in Britain owned TV sets at the time so you could say in some respects it was a full house. And talking of full houses, an estimated 123,000 visitors travelled to the studios to see this live broadcast in its viewing area. At this time the Corporation was broadcasting from make-shift studios at Alexandra Palace, North London.

And let’s end on an inspiring quote from the great man himself: “I was definitely able to transmit the living image, and it was the first time it had been done. But how to convince the sceptical, hide-bound, select and exclusive scientific world? Would they admit that a wretched nonentity working with soap boxes in a garret had done something which many of them had stated was not possible?”– JLB.