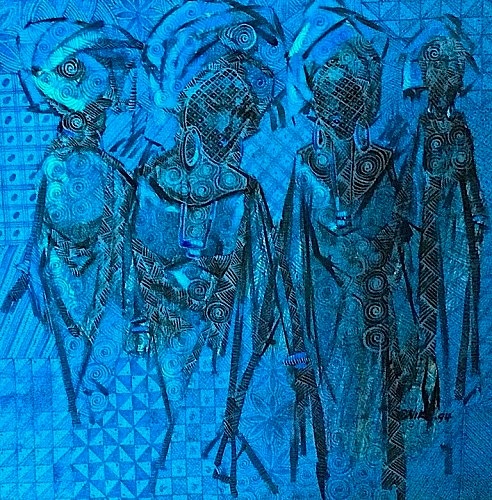 Review of: Nike Davies-Okundaye: The Power of One Woman (Exhibition)

Addressed using her full title Chief Davies-Okundaye, the artist is, indeed, a Yoruba chief, but her life story is one of entrepreneurial spirit and independence rather than privilege. She points out that she achieved everything on her own merit after her separation from a husband with 15 wives and 62 children! She is now such a renowned artist that as well as this exhibition at the Gallery of African Art, another painting, Feminine Power 2002, is being exhibited at the British Library’s West Africa: Word, Symbol, Song exhibition. She also owns West Africa’s largest gallery and is an enthusiastic champion of an indigo-dyed cloth called Adire produced by Yoruba women.

This Adire theme is well represented in her work. One immediately notices the textile-like chessboard patterns across styles whether oil, acrylic, watercolour or pen and ink. Certainly in ‘Dancers With Joy’ (1999), with its figurative depiction of three African women in traditional headwear and robes. The faded, receding red, gold and green hues remind one of the washed out dyes used on fashion fabrics. Perhaps, deliberately used here to accentuate her art-fabric theme.

Her oil on canvas Women of Honour (2005) is actually painted on fabric. The white canvas is ‘knitted’ together as one would a tapestry or rug with the frayed edges evident. The theme of powerful women crops up again – the overriding image of the black matriarch, which Davies-Okundaye represents too, as a Yoruba chief. But the women shown here are everyday mothers and grandmothers, the brushstrokes representing their faces and bodies are angular and slight. Full-coloured in the centre ground, all else is an outline of activity.

When that Adire indigo colour is finally introduced in Feminine Power (1994) it is shimmering and uncompromising. Indigo, aquamarine, turquoise – pinpointing the exact hue no longer becomes the objective when drawn into the wonder of this midnight scene. The four female figures seem effervescent with joy. Happiness and celebration another dominant theme in the work. African women expressing qualities of growth, strength and bursting with the appreciation of life and its ‘biggest mom’ Mother Nature. Not merely hardship and struggle. No paintings of black women with heads buried in their hands.

Continuing this emphasis on joy is Celebration II, a painting of traditional African musicians, which although acrylic on canvas makes you want to reach out and run your hands along it just to check. This is because she’s bumped up this 2D image into a 3D effect using nothing more than the clever use of a paintbrush. You find yourself scrutinising her clever sense of perspective and highlighting skills and pondering whether Chief Davies-Okundaye is playing games with our sense of perception.

The centrepiece – masterpiece even – of the exhibition is Merriment (2004) and also, at 2.5ft by 3.5ft, the largest. The background is now a brilliant, almost neon indigo blue on one side and an equally luminous green on the other, enveloping a social event that looks like it’s rocking well into the night!

Nike Davies-Okundaye: The Power of One Woman runs at The Gallery of African Art (45 Albermarle Street, London W1S 4JL) until 6th February 2016.