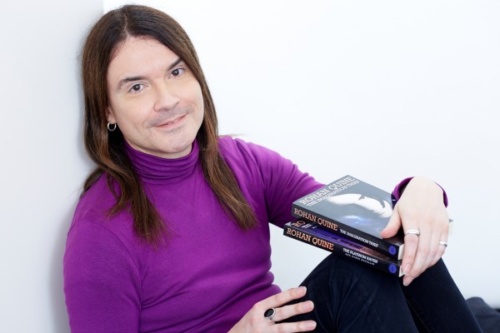 British authors Rohan Quine and J. S. Jones have novels that whisk you away from the humdrum of the UK to more exotic and glamorous locations.

The Beasts of Electra Drive

Rohan Quine was raised in South London but lived in the USA for over a decade so his transatlantic background filters into the fictional elements of the LA in his new novel Beasts of Electra Drive. TV and film work as an actor drew him to New York and Los Angeles but he is now based in East London with his literary fiction taking his creativity in a new direction.

Describing his books as “a touch of magical realism and a dusting of horror”, his latest work The Beasts of Elektra Drive takes you to a mythical LA where Jaymi, an independent games designer, lives in the Hollywood Hills designing ‘Beasts’; games characters that eventually take on human form. He faces competition from his former employers Bang Dead Games and their rivalry crosses over into confrontation and sabotage.

Even today South Midlands-born author J. S. Jones prefers to go by the Jon-Jon nickname he was given as a child, also it was his childhood love of adventure classics that inspired his latest novel, which although themed on a tiger hunt also raises awareness (and funds) for tiger conservation. This is his debut novel for adults and is written in three volumes.

Set in colonial India, upper class big game hunter Charles is tormented by the only catch that has evaded him. Intent on closing this chapter he employs a shikari (Indian hunting guide) to help him hunt down his prey, the most magnificent of tigers. Aristocratic old school colonels and all the stiff upper lip of the Empire give literary nods to classic adventure novels of yesteryear but Jones gives it a 21st-century stamp of relevance.