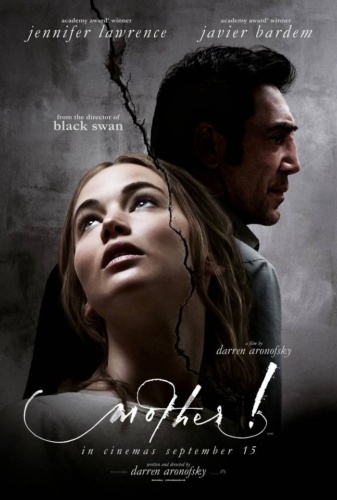 Psychological thrillers are writer-director Darren Aronofsky’s cinematic fare but Mother! takes the genre to the next level. Although his 2010 movie Black Swan was hailed as the Mother of all psychological thrillers, you’ll soon discover Mother! is the Mother of the genre. Javier Bardem stars as an unnamed celebrated contemporary poet who lives with his young wife (Jennifer Lawrence) in anything but domestic bliss. At least she can’t accuse him of being out all hours and living up his celebrity status on the town, instead he invites all his freaky fans home until it resembles a cross between an acid house rave, a religious cult, a Latin American protest march and a military assault.

Amongst the dodgy sets of fans is a family who put the capital D into dysfunctional. Ed Harris and Michelle Pfeiffer are Ma and Pa, with grown-up middle class sons in tow who fight at the drop of a hat. The violence is laid on thick and the macabre atmosphere brings to mind the unsettling affects of a bad drugs trip. The poet’s wife (she too has no name) is constantly reaching for a glass of a powdered substance which may well be medicinal but for all the Boschesque nightmares that occur may as well be peyote. Medicinal or not, there’s an overdose somewhere if innocuous looking drops of blood can spread through the floorboards like acid until they crumble at the touch like soggy wafers. In a horror maybe, but this is just a drama about dysfunctional fans and families right? Not exactly.

The unusually loud and disturbing film score screeches at your nervous system every time she reaches for a fizzy glass of her dodgy medicinal tipple until you feel like a glass of Alka Seltzer yourself. It’s deliberate. You’re on edge and become part of her nightmare as these hoards of uninvited guests turn up en masse and wreck the place. In the early scenes you sense this very guarded poet will be the first to lose his rag. He comes across as the archetypal poet: the sensitive type who will turn psycho if you ruin his creative moment mid-verse.

However, as you become more aware of his willingness to accommodate this chaos in the sanctity of his home you realize this is all a metaphor for celebrity. When this over-the-top religious adoration erupts into something twisted and cruel he doesn’t seem too concerned as long as he is the messiah-figure in the eye of this bedeviled storm and can delve into it to source a disturbing vein of creative inspiration. He has writer’s block, you see. He’s also impotent and wants a child. The parallels are obvious.

The nightmare of domestic intrusion shows no sign of abating even when the poet’s wife announces she’s pregnant and needs some peace of mind. It actually gets worse. There’s a tense finale where on the verge of suicide she threatens to ignite a keg of substance which looks a lot like marmite and nothing like petrol and just like marmite you’ll either love or hate this head-trip of a movie, laden as it is with deep and twisted metaphors.