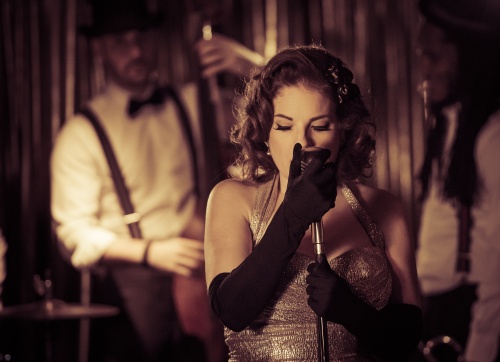 We chat to Abi Gilchrist, lead singer of popular vintage band Miss Kiddy & the Cads. Mum-of-two Abi studied at the prestigious Guildhall School of Music and was a classical singer before starting Miss Kiddy with husband, composer Ross Power.

How did Miss Kiddy & the Cads get together?

Miss Kiddy and the Cads was the brainchild of myself and my husband Ross (‘Miss Kiddy’ and ‘The Boss’ on piano), the rest of the band are old friends and colleagues who we have been playing with for many years, in various groups and on numerous projects from making TV theme tunes together (Do You Know? on CBeebies) to playing in Caro Emerald’s band.

What inspires your performances?

Our inspiration is to give the audience a perfect time and to play a guessing game of ‘name the song’ as we turn well-known tunes on their head in our vintage style. We also love creating a fantastic atmosphere at our performances – one that evokes the thrill and glamour of the 1940’s so that everyone leaves feeling like they’ve had a unique moment back in time but with a distinctly modern twist.

Tell us about upcoming gigs at London’s Underbelly festival?

We are so excited to be playing two shows at the Underbelly this summer – our show there last year was a sell-out and was our absolute favourite of the year. It turned into quite the vintage party and everyone left on such a high. The Metro newspaper featured us as one of the Top 5 Musical highlights of the festival. This year you can expect some new brilliant songs along with our classic favourites, stunning tap dancing along with a lot of laughter as usual.

Is there anyone you would like to collaborate with?

We would love to collaborate with a big old swing band – like the Guy Barker Jazz Orchestra and, play on Friday Night is Music Night on Radio 2. That would be awesome. Our music would work so well in the context of a big band.  We would also love to work with some theatre greats and incorporate them into the show as guest characters – Barbara Windsor would have been fantastic as the ‘mob mama’ wouldn’t she? And, a tremendous gent to play Miss Kiddy’s love interest – can I suggest Hugh Jackman? He can sing too, so that it would be perfect.

Where is your favourite venue to perform at in London?

I think we will have to say the Spiegeltent at Underbelly Festival as the tents feel like our natural vintage home and, the vibe is always incredible. Whenever we have played in one at Henley Festival or White Mink in Bristol, it’s still the same. We also love doing a more intimate show at Pizza Express and Crazy Coq’s too, and we are excited to be bringing our show, for the first time to a proper theatre space with our own ‘A Vintage Christmas’ concert at Leicester Square Theatre on 8th December.