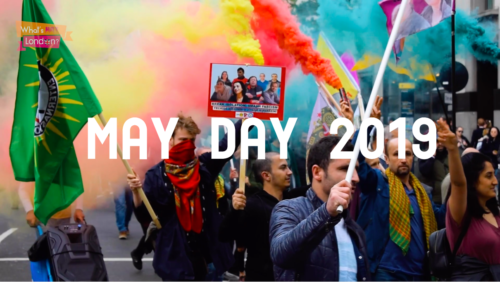 Yesterday thousands of activists took to the streets of Central London to celebrate International Workers Day. They marched along their traditional route from Clerkenwell Green to Trafalgar Square with banners supporting a variety of causes.

International workers day was set up to commemorate the Haymarket Affair of Chicago 1886. When, during a general strike for an 8 hour work week, a bomb was thrown at police officers trying to disperse the crowd.

The police retaliated by firing on protestors and rounding up the ring-leaders, eventually executing four of them. The event was seen as a watershed moment for the labour movement and helped shape unions across the world.

However, the movement has come a long way since then. That has resulted in the huge variety of causes being supported at yesterdays march, from communists and sex workers to Kurdish and Kashmiri activits. But why, after over 100 years, are marchers still coming out on may day?

It’s all about one word: Solidarity. The many different groups represented yesterday certainly do not agree on everything, but they know that if they band together they are stronger. As one of yesterdays marchers said to me, quoting James Conolly, leader of the easter risings, “If we don’t hang together, we all hang separately”.

These activists have may differences of opinion, but they take note of something while we all need to remember a little more these days. We have more in common than we think.