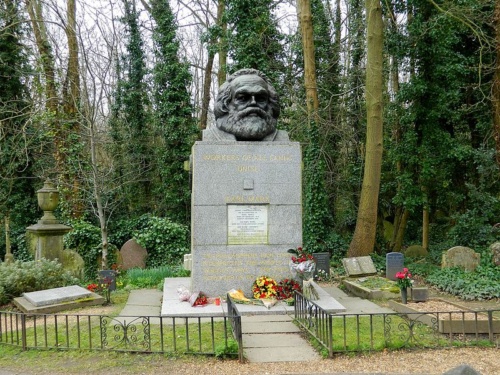 Highgate Cemetery has been a century-long tourist attraction not for those with a taste for the macabre but admirers of a certain political philosopher whose Das Kapital and Communist Manifesto arguably had a greater influence on 20th and 21st-century nations and the beliefs of mankind than some major religions. Marx didn’t have too high an opinion of these religions though. He was quoted as saying: “Religion is the sigh of the oppressed creature, the heart of a heartless world, just as it is the spirit of a spiritless situation. It is the opium of the people.”

However, it is arguable that the brand of communism that emerged from his economic and political philosophy so eschewed the values he once held dear that some historians claim it became the new opiate of the people. Even though his original intention was clearly the economic freedom of the working classes, many nations that took on his ideas imposed a state-centred dictatorial apparatus not too dissimilar from the nationalist powers they opposed in the throes of the Second World War.

Born in Germany in 1818 to a middle-class family, he followed his father into the legal profession but didn’t last as an attorney. The seeds were set even before he went to university, with Marx wanting to study history and literature there but his father insisting on a law qualification for more stable job prospects. He married into the aristocracy and by the time his wife Prussian baroness Jenny von Westphalen had their fourth child in 1849, they were living in London.

Despite his marital links with the aristocracy he still championed a Communist League which sought to empower the working classes into overthrowing the feudal aristocracy with the help of the bourgeoisie. Marx believed this would trigger the working class into seizing the means of production and feudal land. He foresaw a bourgeoise revolution followed by a working class revolution. During his time in London, this political mission never abated, with Marx now a familiar figure on Great Windmill Street, Soho where he attended meetings by the socialist German Workers’ Educational Society.

While exiled in London he declared himself a stateless person and eventually died there of pleurisy and bronchitis. He was buried in East Highgate Cemetery and his closest friend and political ally German socialist Friedrich Engels attended the funeral and lead the speakers. He addressed the mourners with these words: “On the 14th of March, at a quarter to three in the afternoon, the greatest living thinker ceased to think. He had been left alone for scarcely two minutes, and when we came back we found him in his armchair, peacefully gone to sleep-but forever.”