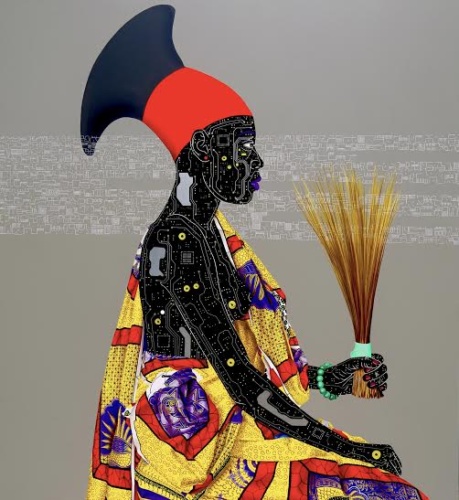 A year after Eddy Kamuanga lluanga’s much talked about London debut at the Saatchi Gallery’s Pangaea II, his October Gallery exhibition again brought the Democratic Republic of Congo to the heart of the capital. However, this time the 24-year-old artist addressed concerns about the mining of coltan, a mineral used in almost every electronic device and particularly computer chips and mobile phones, and the effect it is having on indigenous tribes such as the Mangbetu people.

Congo is the world’s largest exporter of coltan in our uncompromisingly demanding hi tech age, and being as it is sourced from a country where unscrupulous warlords use it to fund militias and previous conflicts with neighbours such as Rwanda has seen mines seized for political ends, the subject matter is certainly a topical one. He handles it with poetic dignity. His paintings of the Mangbetus depict this music-loving tribe as noble figures in brilliantly coloured robes, but surprisingly none of them bearing the instruments they have become renowned for. The hues are so vivid they seem to pinch away from the canvas, the intensity breathing life into the fabric. The skin tones beneath are an undiluted and formidable jet black.

The most interesting feature is the computer components and circuitry on their bodies which make them look almost like African robots. This is his coltan protest. The majesty of this warrior tribe is interrupted by the invasive stamp of this hi-tec skin-branding which represents how digital consumer culture has not only ravaged their country but their livelihoods. In fact, these paintings depict how it has gone even further and scarred their very souls. A visible virus.

If you look beyond the tragedy of the mineral you will find beauty. Their robes have an almost biblical magnificence that in some ways reminds you of the Christian art produced by the 16th Century Italian masters. Perhaps Christian suffering and sacrifice here finds parallels all over the world where injustice has to be endured with a sense of dignity and faith.  Kamuanga lluanga also draws attention to important details about physiology that may not be 100 per cent correct today but are included as tributes to the Mangbetu in particular and African culture in general. For example, the tribe are known for their elongated heads, hinted at in the paintings, but the practice of wrapping babies’ heads so they would form like this (Lipombo) died out in the 1950s. Either way, he remains a powerful commentator on how traditional and modern practices in the Democratic Republic of Congo has shaped African culture.