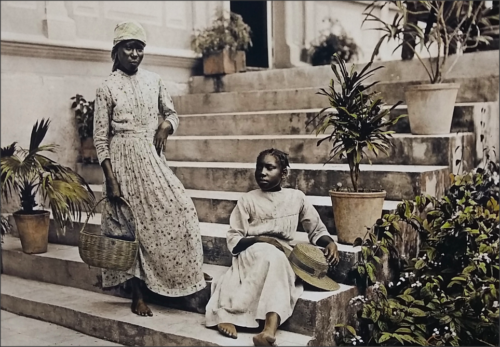 Review of: Making Jamaica: Photography from the 1890s (Exhibition)

In recent years Shoreditch’s Autograph ABP has made a name for itself as one of London’s go-to galleries for exhibitions featuring work of cultural and historic significance. This current display of archive photographs from late nineteenth century Jamaica show how the post-emancipation nation for the first time sought to capitalise on its climate and unspoilt natural geography and promote itself as a tourist destination.

These 70 historical photos, stereo cards and lantern slides from the Caribbean Photo Archive were commissioned back in 1889 by the Governor of Jamaica, Sir Henry Blake, who gathered the island’s white mercantile ruling elite and formed the Awakening Jamaica Committee. Their goal was to use an international exhibition to sell Jamaica as a desirable tourist spot by showcasing its unspoilt beauty while at the same time attracting foreign investment.

This occurred during a period of transition where following emancipation in 1838 Jamaica’s slave-based sugar industry had dissipated and new international trade options were sought to revitalise an ailing economy. Some photos from 1900 show workers cutting sugar cane and sorting cocoa; the agricultural market still a key one throughout this period.

It was a Scottish travel photography company, Valentine & Sons, who had been entrusted with capturing these scenes of everyday community and working life in villages and main cities. The original negatives were destroyed but New York-based Patrick Montgomery now owns the complete private collection. Curators Mark Sealy and Renee Mussai were fortunate enough to source these varied and culturally rich shots, one of which shows the Indian presence in a ‘West Indian Coolies’ photo attributed to A. Duperly & Sons.

Also amongst these is a distinctly vintage 1891 shot of five turbanned members of the Kingston-based West Indies Regiment Gun Detachment performing a cannon-firing drill. The vintage look of all the displayed work is complimented by a contemporary artist commission which saw Ingrid Pollard create five hand-tinted large scale prints from scans of original Valentine prints. Her signature techniques owe much to 19th-century photographic processes and this is certainly evident in her latest work.