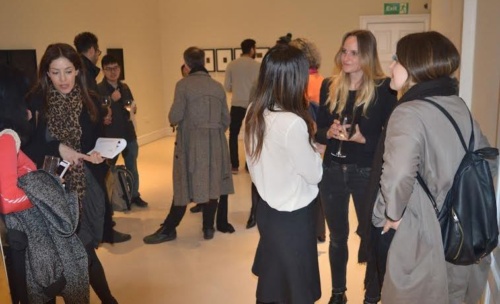 Review of: Maha Ahmed: A Seed Once Planted (Exhibition)

Central Saint-Martins College of Art graduate Maha Ahmed is no stranger to these shores having studied and lived in the UK but her inspiration comes from her birthplace of Pakistan. Her series of miniature paintings currently being exhibited at Asia House honour the tradition of miniature paintings which emerged during the Mughal rule of the Indian subcontinent. Earlier studies at the National College of Arts Lahore, no doubt, essential grounding for the historical and cultural significance of this work.

Discovered at a graduate show by the Display Gallery, Holborn, she is one of a select few championed by a gallery team that has emerging talent at its heart. Auspiciously, Mariam Neza, curator of Asia House was also instrumental in bringing her talents to the public. The context of Ahmed’s work a perfect fit with their programme of arts and learning.

Viewed as a gallery wide shot her work is an unashamed exercise in minimalism. A combination of the absence of colour and their small size making them shrink even more, although not all of them are what one would comfortably describe as miniatures. However, the overall effect is sombre, a sense or mourning or at least respectful stillness.

These abstract gouache on paper pieces have a simple, almost charcoal quality – at distance anyway. On closer inspection there is a reference to textile in the creases and folds but also, perhaps, the barest expression of a gentle but charmless black sea that although nonthreatening is fathomless enough to take its victims whole. And it’s no accident. The inspiration behind this was a series of wars in Pakistan during the 1970s. Her mother told her stories about how households covered their windows with black cloth so they were camouflaged against the ongoing hostilities. So in the unease of proximity you’ll find this black cloth re-imagined by the artist.