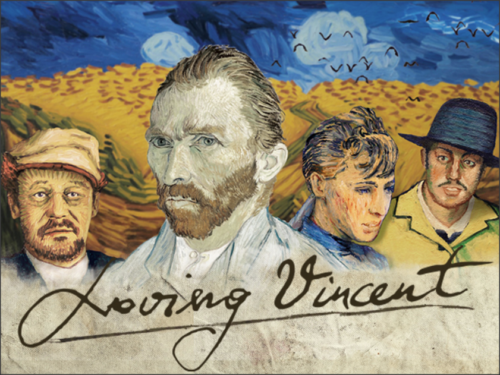 Red-haired, bearded writer/director Hugh Welchman is a bit of a Van Gogh lookalike himself, well his efforts to produce the world’s first fully hand-painted feature film culminated in a UK premiere at the National Gallery on Oct 9 that also had people at 170 other cinemas across the country holding out for the much-promoted live Q&A at the end. Certainly, a round of applause is par the course after theatre performances but rare in cinemas. Well it happened. Not just in the National Gallery (where, again, it was probably expected, but in cinemas all over the country). Perhaps as much out of respect for these efforts, which saw 65,000 frames painted over three years by 100 classically trained artists and it took three more years to edit.

The Dutch Master’s life is ideal for biopic cinema, documenting as it does the tortured genius who only started painting aged 28 after failing at four careers but who went on to create 800 paintings in eight years before he died. He sold only one in his lifetime but is arguably the most famous artist in history alongside da Vinci. The movie itself is like a Van Gogh painting come to life; his bright, thickly applied paint and brush strokes full of angst-driven expressionism, reinventing commonplace features such as skies, sunshine, streets and buildings in the way traditional 1800s Romantic painting never could.

When the film starts with a punch up in a bar and some rowdy cockney accents are heard, you might mistake this for the boozy goings-on at The Queen Vic but the East End lingo is an attempt to make the Van Gogh story a familiar one and not soley the property of southern France, where he lived and the Netherlands where he was born. It’s certainly a brave and interesting take because one associates post impressionists with the romance of the sunny Med not Walford E20. Van Gogh’s life story certainly isn’t sunny but he moved to Arles in the south of France and many of his paintings highlight the summery temperatures even where inevitably they are tempered by the dark expressive angst that led him to cut off his ear and give it to a prostitute as a gift and finally take his own life by shooting himself in the stomach.

Early on it’s easy to get caught between wondering whether you’re watching cartoon or live action but it has the best of both elements and you fully invest in this novel approach to storytelling. There’s not enough of Vincent though. OK, he’s been dead for a year when the film starts but flashbacks of the great man would have drawn the audience deeper into his own story. The majority of those going to see the film are seeking glimpses of the thoughts, loves, hates, drives and absinthe rages that drove his creative genius and there is little of that. It is left to the less glorious Armand son of the Postmaster to take on this mantel as the star we ought to follow.

Van Gogh painted a famous portrait of Postmaster Joseph Roulin and the movie is told through his son Armand (Douglas Booth) on a mission to deliver Vincent’s letter to his brother Theo and all the while gathering clues about his death. Armand has an East End accent and his father speaks with an Irish lilt, the film producers though haven’t swung to the extremes of Oliver Stone’s Alexander where the Macedonian conqueror also boasted an Irish accent (well at least France and Holland are a lot closer to the UK!). Anyway, the film-makers use Armand to examine centuries-old rumours that Van Gogh was in fact killed by gun-wielding local youths but Van Gogh’s pal and fellow painter Dr Gachet (Chris O’Dowd) helps shed some light on this. Film and art fans alike would appreciate a movie like this made with such painstaking attention to visual details and using them as a vehicle to understand the world of artist Vincent Van Gogh 1853 – 1890.