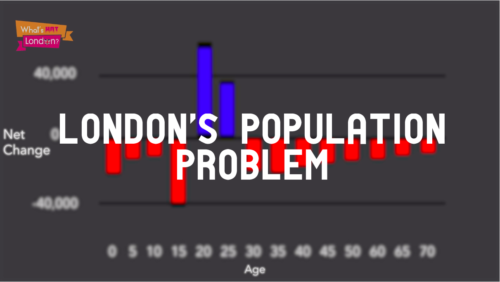 London has a population problem. More people are leaving the city than ever before, yet it’s population continues to grow. How is this happening and what does it mean for the future of London and the UK?

In total 550,000 more British people have left London than moved in from other areas in the last decade. However, two factors explain why London’s population continues to grow. The first is immigration, which has increased by 860,000 over the last 10 years. This has influenced the second factor, a high birthrate, which has seen 790,000 more births than deaths over the same period.

However, this poses a problem. With our imminent EU departure and a right-wing government keen to cut immigration, there may not be enough new people to make up the numbers. This could mean that there are fewer people to take on the thousands of newly created jobs that London has to offer and could eventually end up slowing the London economy.

For some, that would be a positive turn of events. Regional Britain has been unfairly neglected for years and a downturn in London’s fortunes could signal an end to our London-Centric mindset. This is an understandable point of view, however, there are two important caveats: fewer London jobs don’t necessarily mean more jobs elsewhere and a slowdown for London would mean a slow down for the UK.

More help is desperately needed in regional parts of the UK, particularly ones that voted ‘leave’ in the referendum, however this help should not come at the expense of London. For the UK to do well, London must do well and that means two things. 1. Reducing the spiralling housing prices which scare away young families. 2. Retaining the high level of immigration which has not only made London economically succesful, but has made it the diverse, vibrant city it is today.