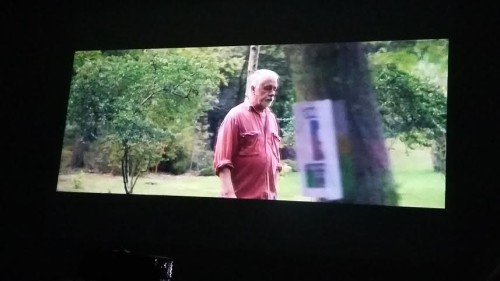 Set against the scenic canal side location of The Proud Archivist in Haggerston, The Conclave stands alone as London’s only weekly film festival. Its Monday night offering of shorts vary from music videos to major festival fare.

No less than five of the films had also premiered at the Sundance Film Festival including Peace In The Valley a documentary about the build up to America’s biggest outdoor crucifixion play with Arkansas locals also preparing for a historic vote on LGBT rights. The unusual blend of topics in one short film perhaps a reference to Christianity’s doctrine of universal love conflicting with religious intolerance.

Of these five Sundance films the only British one was Volume (2013), directed by Mahalia Belo. An atmospheric, dream-like piece about a girl who goes missing and her relationship with the admiring boy next door. It looks and feels like a feature length film, with lots of slow zooms, narrative that is similarly paced and every character three dimensional and mesmerising.

The strangest of the five was The Cub. It’s not everyday you see a film about a deadpan husband and wife who calmly instruct a pack of wolves to bring up their daughter. And even rarer one where it’s not only based in one location but the exact same spot in a forest. Altogether a great variety of work and an all round entertaining night. Recommended for those seeking a less heavy night out at the start of the working week.

The Conclave – London’s Only Weekly Film Festival happens at The Proud Archivist, Haggerston every Monday. 7pm.