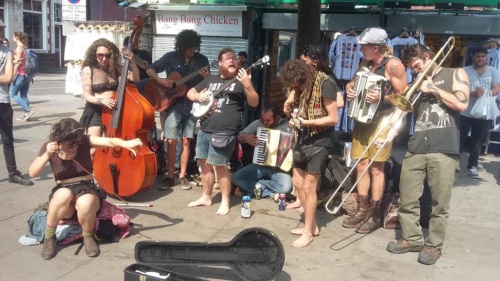 Summer time is always a trigger for London buskers of all backgrounds and degrees of talent trying their hands before the crowds. One-man bands, magicians, jugglers, break dancers, shamrock yodas dressed in green garb on St Patrick’s Day, you name it the London crowds have probably seen it. Covent Garden is the unofficial busking centre but you’ll find musicians gathered in and around every tube station from Camden to Brixton. But when did all this begin in our proud capital?

The word busking was first used in Britain around the 1860s and comes from the title of a Spanish novel about street acts called El Buscon. The original word was buscar which means ‘to seek’ although this obviously has no direct relationship with street performance and perhaps can only be understood in the context of a very vague book title.

The 1860s was a pivotal period because the Victorian poor had suddenly found a way of making money by showcasing their talents. Unfortunately, the richer classes didn’t think the increasing racket was in keeping with their refined tastes and feared street music was becoming a nuisance. The Street Music Act of 1864 sought to to appease these literary and middle classes as much as to regulate noise levels.

Today busking laws are a little more complex. There is no national law covering the issue but borough restrictions apply. In fact every London borough except Camden now demands a permit before you can perform (which probably explains the title photograph showing a full nine-piece bluegrass band from the USA busking on Camden High Street!). Also since 2003, Transport For London’s busking scheme encourages legal busking and auditions hopefuls who then get a slot before the 9-5 throng of commuters. With busker Hayley Moss  appearing on Tonight at the London Palladium, this spartan platform is not to be sniffed at, even if it is usually just the odd pound coin here and there from passing custom.